"At the Master's Grave" by Hugo Steiner Prag serves as a foundation for Giger's Mordor VII?

a) 17th of August 2015. Based on subjective impressions, I think about this image more or less as fish and tiger prawns/shrimp, but the most central figure which a half formed thing, I want to associate with Gustave Meyrink's The Golem, although there is nothing specifically literal to associate the two, but Giger loved Meyrink's work, so it might be a natural direction. I have at the time of writing been making the association for more than a week. I read the book some years ago and then the realisation that it must be this thing simply jumped into my head and there it stayed. Meyrink's novel The Golem seemed to be more connected with his own dream like states than with an actual story focusing on the more traditional idea about golems.

b) The picture that was Giger-ised
The next thing for me to assume was that Giger must have taken one of the illustrations as a starting point. Although Kubin started some drawings, he used them to accompany another work and much later Hugo Steiner Prag developed some illustrations to accompany Meyrink's The Golem in 1915, and indeed on the internet I found one with the curved body with a head looking backwards and arms going right down to the bottom of the drawing  showing the Golem walking through a ruined graveyard with bare trees.

c) The picture that was Giger-ised
The golem's hand connected with a tree branch as it walks through the graveyard and Giger transforms into another arm almost as if its the shadow of the golem's arm taking on a three dimensional form of its own.


However this figure has a small skull like face, perhaps the white space beneath it was going to be the profile of a face before suddenly Giger changed his mind and left it almost blank apart from some detail in its jaw area, meanwhile in the original drawing there is a black shadowy space in its place, but the small dark round skull appears to be wearing a nightcap that is transforming into a face of its own.

In the novel, there is a scene describing how when lead is poured into water, it forms a small smooth round head as if it had been poured into a mould and this was like the head of the golem, and this I believe led to Giger putting in the small round dark skull as an image,

The creature's back merges with the crustaceous landscape and a road forms where it has connected, sloping downwards in the picture. Various small eyes from various faces appear as they often do in Giger's work. Along the trunk like body curving around the top left, perhaps along it from where it connects with the golem are piano keys connecting to piano strings. 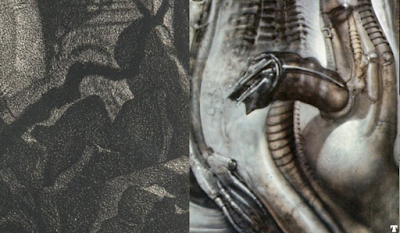 The crustacious trunk ending with a hand coming down the top right of the picture matches up with the outline of the large tombstone to the right of Prag's picture, and there a further stone down below with its top behind a branch which is transformed by Giger into a hand touching a bulbous sack with something almost like a curved dildo penetrates its opening, and and one can see the shadowy gravestones and a branch and what might be either a curved twig or the head of the golem's foot raised backwards, connecting to the stones in Prag's picture that Giger has transformed.. The Prag illustration's details are not entirely easy to decipher.