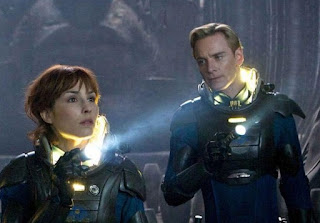 a)  Changes for Noomi from her previous reserved behaviour
Normally Noomi didn't want to talk too much on the set, such as when she did the Girl With The Dragon Tattoo, she would spend most of the time sticking to herself and sit in the corner, drink her coffee and not interact with people, and so she couldn't explain her behaviour on the set of Prometheus because she was in for conversation

While on the set, Michael Fassbender and Noomi Rapace didn't really talk about what they were doing with their characters to each other. Noomi would be about to tell him "I might do this"

Michael was more the sort of person to say "show it to me and surprise me in the scene. Just do it, you know. It's my job to be able to respond to you".

Later they would reflect on their roles through interviews.


b) Noomi differentiates between Fassbender and his character David
Noomi looked at people through the idea of energy, and Michael's energy was so different on set and she was trying to work out what was going on in him trying to read him and she couldn't understand if he was being sarcastic or ironic, or if he was trying to make fun of her.

It was if the character David the robot was coming through which was different from the way that Michael normally was. 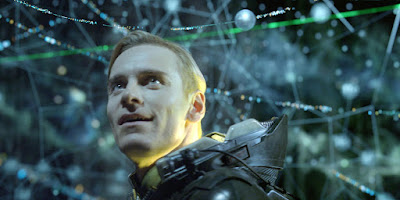 Fassbender agreed that he thought that was why David took a particular interest in her, even while she was in cryostasis, while she's asleep and he goes into her dreams and Fassbender thought that this was an intrusive things to do to her, but he was curious about her throughout.

Her character would be seen to make making her various discoveries and there's something about her that's different from the rest of the crew members, a certain curiosity.

So Fassbender thought that David was investing in her more than he is any of the other crew members on board, and so found her a interesting case.

Perhaps David was fascinated that she was a scientist and yet she had a belief, this faith which we know little about but she is using science to prove her faith and so David likes the the film Lawrence of Arabia and so David would be comparing her to Lawrence of that film, having a clear vision and going to get tto it no matter what


e) Elizabeth Shaw's background
Noomi thought of Shaw as being innocent at the beginning.

So she was geared into thinking outside of the box.

But it resulted in a sense of conflict, a contradiction between being an archaeologist, a scientist and a believer, but being a believer made her strong in the most critical part of the movie.

One might take a look at the Lawrence of Arabia character and see that he was someone who was thinking as both an English man and an Arab and didn't seem to belong to either group in the end, being an outsider which David also was, as the only robot on the expedition.

The human's treat him with a fair amount of contempt.

However Noomi's view was that people treated David with contempt only when he misbehaved and that when he did what he was programmed to do, everybody was nice to him.

g) Holloway falls victim to David
It would be Fassbender's first scene with another actor in the movie, and David was wandering around the ship and he needed a guineau pig and the reason was purely scientific.

The reason why he went for Doctor Holloway, the character presented himself to David.

Noomi thinking as Shaw might wonder why he didn't pick one of the cruel people in the ship, but then it was Holloway who was being mean to David anyway.

But since Holloway was Shaw's boyfriend,  Noomi's view was that Holloway was like an open target because he was so restless, childish and immature in a way, and desperate and angry, so perhaps he would do everything and anything without thinking, but she was not entirely sure, and neither was Michael

h) Noomi's realisation about David
Noomi understanding was that David was not supposed to have his own agenda and when Noomi was being Elizabeth, she would have to correct herself and remind herself that David was a robot, a computer and then at one point in the movie, she would feel this huge rage, and anger towards him and then remind herself that he was a hard disk with no soul or emotions, and he wouldn't really understand her as a human who has a soul.

Elizabeth Shaw would be the heart and soul in the movie and David the brains, and they could be a good team.

Fassbender agreed with this point of view although he saw his character as a hard arse/ass rather than a hard disc.

i) Shaw comparing to Noomi
In comparison to Noomi, Shaw was much more fragile, humble and vulnerable, but she is a survivor with the kind of instinct of never giving up or giving in, and always found a way to pull herself together and stand up again.