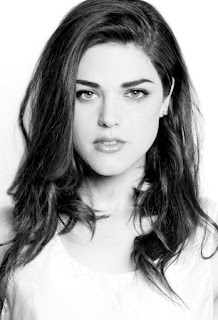 a) Casting
Callie was shooting the movie Graves in Albuquerque, she had just arrived there and no one to read with since everyone was working.

She then called a friend and said  "Can you just record these lines with spaces in between them into your phone, and I'll film it in my hotel room on my own."

She watched the first tape and thought "Oh my God, this is ridiculous, this is hilarious."

Within three hours of her sending in the tape, she was called back and they said that they wanted to see another tape.

She then called another friend and did it again .

Then she came to LA and met with some people and that was it.

She had no idea of what character she was playing and no idea of what the script was like, but she knew it was Ridley Scott directing and that there was an incredible cast, so that was fine for her

Her manager called her to tell her she gold the role, and she began the quintessential crying, screaming and sh was sweating for some reason.

Perhaps she asked "Okay, what role am I playing?"

The manager jokingly replied, "You're playing the Alien. No one told you?"

All they knew was the name of her character until perhaps a month before going to Australia.


b) Memory of the filming
She was used to being in various ensemble productions.

She was very surprised with how much hey all hung out in Australia togethr while filming Alien and so how much they all went to get dinner together.

There would be a moment wher she was sitting around and saying aloud "Okay, hi, Billy Crudup. Hi, Katherine Waterston. Hi, Michael Fassbender. I did get cast in this somehow, so I somehow deserve to be here."

Everyone was very welcoming , open and warm.

Callie found that the sets seemed very real, she would be aboard the ship set and would hear Ridley say ‘Turn on the hydraulics.’

She finished shooting in June