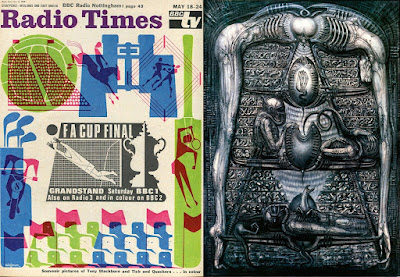 a) Radio Times May 16th 1968 appears to have been another contributing factor to HR Giger's Life Cycle Hieroglyphics painting from 1978.


b) If so, someone who had been collecting Radio Times would have shown him the cover, and so this would help to think about breaking the image down into segments with different things going on.

c) Perhaps a flag at the bottom left of the Radio Times cover, that intersects with a spectator's head turns into the dead face hugger.


e) Perhaps the slant on the left side of the crowd of people and the man reaching out for the ball helps the development of the idea of the triangle.

f) The binoculars helps the development of the division in the female figure's body.

g) The motorbiker would also be referenced in the general structure of the painting as well, because of the circular forms and T structures.