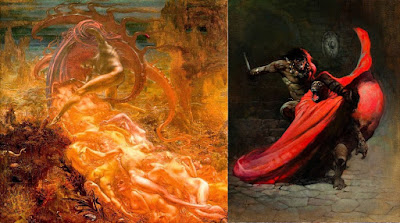 Leading from
"The Treasures of Satan" trail
and
Frank Frazetta

b) It's presented here because I believe that Giger referenced it in his painting Mordor IV (work 280) and then on May 14th 2017, I suddenly realised that it appeared to reference Jean Delville's 1888 painting Treasures of Satan, taking it in reverse, with the cloak becoming he trail of bodies and tentacles and this is why Giger used it in his Mordor IV.


c) The release of the British publication of Conan The Barbarian unleashed the Man-Ape painting across Europe, and amongst those who look as if they took notice of it were Chagall, Chris Foss and HR Giger, and perhaps some of them had an awareness of the similarities between it and Treasures of Satan