Prometheus: Ridley Scott's appreciation of the Martian technology in "Quatermass And The Pit"

Leading from
Quatermass And The Pit


a) Previsitation Scenario
Nigel Kneale wrote a very good screenplay for the Quatermass and the Pit TV series from 1958-1959, and then this story was made into a film with a different cast in 1967,  renamed for the American audience as Five Million Years to Earth.

Ridley was able to talk about some of his ideas for Prometheus in terms of what he remembered of the film.

He was impressed by how early Nigel Kneale came up with this concept of Previsitation even before the likes of Eric Von Daniken, although perhaps Kneale's work might bear traces of Arthur C Clarke's Childhood End which was a story that Stanley Kubrick would consider turned into film but was made into a television film in 2016.

Ridley wanted to show what happened to Engineers in the silo, and rather than animate hundreds of them running around digitally, which he thought would turn out hokey.

He thought that he could show a quick shot perhaps where you didn't quite fully know what you were seeing, a little like the blurry shot from a film called Quatermass And The Pit.

Quatermass And The Pit's story contained a machine that could read and display pictures being displayed in the mind, and characters were having race memories inherited from their distant Martian ancestors.

In the film they went into the human brain and show the ancient race memories of life Mars where the alien species were carrying out a mass culling to cleanse their own species.

The story entailed what was perceived as a bomb or a V2 rocket that hadn't gone off, but was lying beneath, firstly in the TV series, a Knightsbridge building site, and later in the film version,  in the walls of an underground subway station.

It looked cylindrical, and like a weapon. They seal off the area and send in the army personel , but they discover that it appears to be spaceship that's five million years old.

So it was always a haunted street and then cottages built there would become haunted, and Ridley loved this idea, 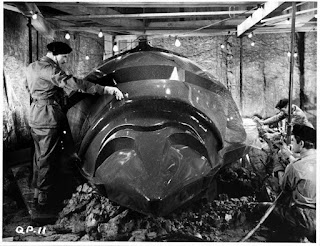 The station is Hobbs Lane and Hob was the nickname for the devil.

It had been called Hob's Lane since the 16th Century because there have always been strange emanations in what was then the countryside before it became a little street and part of the city, then later changed to Hobbs.

So it would have been that the street was always haunted and then as cottages were built upon it, the cottages became haunted. Ridley thought that was such a great idea, because it provided the basis for something tied up to historic fact to present day repercussions.

There would be the idea that people thought that something was a ghost, but it was something due to the presence of this spaceship in the ground that set of visions of the human's own ancient memories and set off their inherit psychokinetic powers inherited from the Martian genetic alterations to the human's prehistoric forefathers to carry the genes of the Martian's own dying civilisation.

Whatever this technology was about, it was the Martian's own and somehow its strangeness made sense. Ridley wanted something comparable for the civilisation that the creature that we would come to know of as the "Space Jockey" and they would be named "The Engineers" and so this became the fundamental basis for the holograms of the Engineers running around. 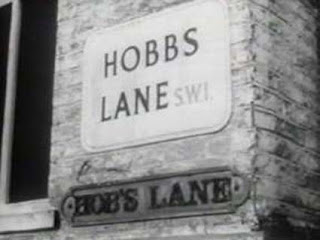 e)  Holographic display
In the corridors of the domed building and the derelict ship, we would see holographic displays of the last significant event that took place such as Engineers running away from an unseen foe, leading to one collapsing and being beheaded by a door leading to perhaps an emergency exit.

We would also see a holographic display of the Engineer arriving in the pilot chamber of the Juggernaut, preparing for their flight, perhaps unconcerned or unaware that three out of four of them are infected by the black stuff found in the ampules


f)  Stone Tapes
Perhaps Ridley also knew about The Stone Tapes written by Nigel Kneale as well that explored the idea of the stone in a room containing an electromagnetic recording of a traumatic event that happened in a room that was being seen as a ghost, since this fit in well with what was going on with the holographic recordings in Prometheus