Jack Kirby's illustration of Olympia from The Eternals predicts the mysteries of Occator Crater Lights? 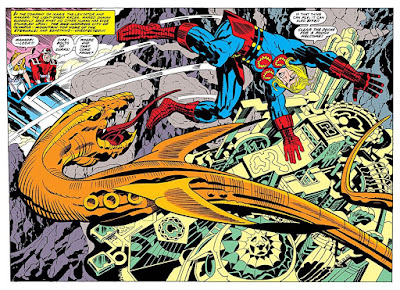 a) In The Eternals #9 comic book, from March, 1977, Jack Kirby drew an illustration showing Olympia, home of the Eternals, and above it flew a large flying serpent but the city showed a structure that was comparable to what seemed to resemble a structure in the glowing forms photographed in Occator Crater on the Ceres planetoid in 2015.

b) I have already made a comparison between this drawing and a landscape drawing by HR Giger that looks partially inspired by the drawing of a cylinder vacuum cleaner transformed into a secret military weapon or installation in the movie Our Man In Havana, and then later I believe that Giger used this drawing by Kirby with knowledge about how it interpreted his work for the later stages of the design of the derelict ship in Alien

c)  Since Jack Kirby is renowned for his early depiction of the Face on Mars in a comic book story,  (See: The Face on Mars,  "Race for the moon" #2, 1958) one might ask if he made an internal flyby of Occator crater, or indeed created a drawing that would predict elements familiar with those who would develop a fascination for the thing? What he drew would be something for a comic book page characterising the place rather than as an illustration for a book exploring the place in detail.

My view though is that if the illustration of Olympia can't be considered reminiscent enough of the structure in the Occator lights, then one can only continue to look for something that ought to be it amongst Kirby's drawings.

A large sloping structure with glowing forms either side, which appears to be something noticeable in the Kirby illustration.

If there is a city structure to be found Occator Crater, Andrew Currie's drawing was based on what there was to be seen in 2015 which was a fairly low resolution image of the place and perhaps Jack Kirby's illustration perhaps represents a very simplified and stylised impression of the place in itself, but there's enough general similarity in the large sloping building with structures either side of it without having to look for something more exact.

e.i) September 10th 2016, I've discovered a later interpretation of the Olympia city by Sal Buscema published in The Eternals v2 #001 (1985) which was basically Kirby's Olympia redrawn without the flying serpent.  It makes it look as if various elements had been displaced in Kirby's for the purpose of adding the flying serprent and here they've been put back in order,  and so the vertical belt of lights now seems to show up properly because embarrassingly I was wondering where they were. 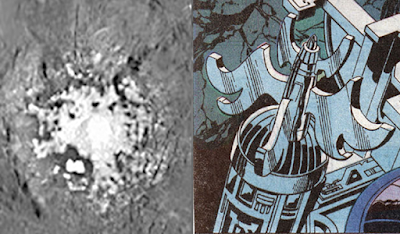 e.iii) Structure roughly resembling a humanoid head and shoulders
Within the Cerealia Facula, there is a structure roughly resembling a humanoid head and and upper torso staring up and to the right of it is a block like shadow and perhaps this has been incorporated into the cityscape illustration but with the structure displaced and moved to the right bottom roughly where the Vinalia Facula's T-shaped shaped building like structure right light ought to be. In Kirby's illustration, this figure is obscured by the flying reptile's tail, making it look roughly like a bird with folded wings pointed upwards and pipe like feet. 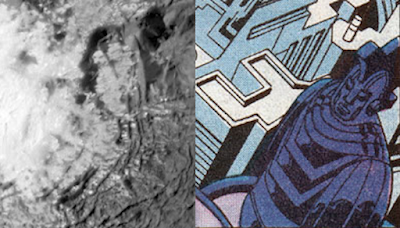 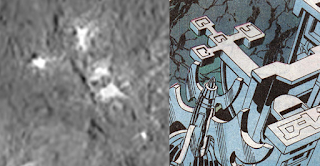 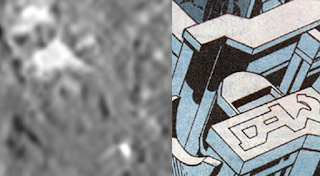 e.vi)  Vinalia Faculae: The lower light square
Perhaps the light at the lower end of the central vertical belt of lights becomes the gap of the U shape of the top of the building to the left of the human figure 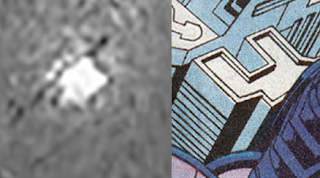 e.vii) Vinalia Faculae: The T shaped building
Then the main lights formation to the right that looks like a sloping T shape remains as the central building with the slope in it, the light on the left side of the T remains as a tower composed of four cigar case shaped cylinders while the light on the right side becomes becomes a human figure. 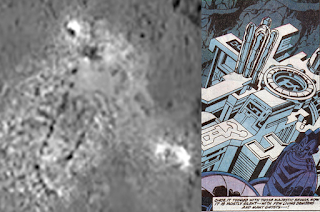