Alien: Development by way of Tintin
and
Concept for the derelict by Chris Foss, no.3 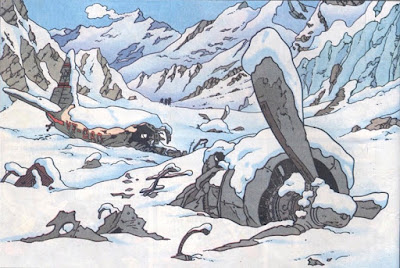 a) September 25th 2017. Looking further through The Adventures of Tintin: Tintin In Tibet (originally serialised weekly from September 1958 to November 1959 in Tintin magazine), I looked at the illustration of a crashed plan and suddenly it starts to reveal in my mind that it served as a starting point for another concept illustration for Alien,  and then oddly I matched it up with Chris Foss' derelict ship number 3

b) The black angular shadow in a piece of wreckage suddenly shows itself up in my mind as a starting point for the repeating triangular pattern across what might be the ships engines. 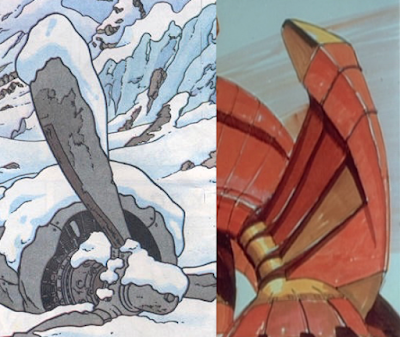 d) The propeller blade becomes the large feature on the fin that's repeated on another in the background. They lean towards the same direction in the composition.

e) Propeller blades in the distance become the arrangement of fins on the top of the derelict. There are also the tale fins of the plane to consider in the illustration and one might consider the result to be a merger between these  ideas