a) Damian Martin sculpted the the mouth burster sack, described also as a version of Giger's prolapsed stomach womb based on his artwork Emily James would paint up the hollow hot melt vinyl sacks. 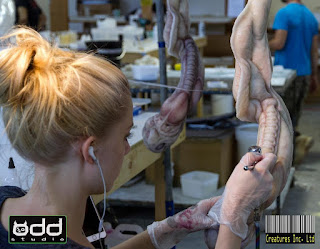 b) I had set myself the task of finding out what piece of Giger's artwork they were talking about and then thought about the artwork for the vomit creature from Poltergeist 2 was used in the design for the Mouth Burster sack for Alien Covenant. In the Poltergeist 2 movie, it would transform quickly into a limbless humanoid that crawls beneath a bed and transforms into the great beast, which seemed to be fairly similar to the growth rate of the Neomorphs from Alien Covenant.