a) Philosopher lecturing on the Orrery by Joseph Wright of Derby.

It appears that this painting while showing signs of referencing Piranesi's Carceri Series, Plate XIV, which itself references Petrus Christus' The Lamentation (1455-60?), as well as El Greco's Agony in Garden of Gethsemane (1590s), curiously its form appears to echoes of the Embalming Ritual image that's likely to have been known about in Egypt for a long time but I would like to find some provable examples. The straps along the mummy would have been transformed into the frame of the orrery. The tale would become the shoulders of the man holding the notepad while the angle of the upper part of the mummy's feet leading to the toes would transform into his arm holding the notepad. The back of Anubis would would become the shoulders of the lecturer.

The SPV vehicle appears to be something that could also loosely based on the Embalming Ritual with the feet of the mummy becoming the tail fin like forms, while the Anubis bending over would become the upper part of the vehicle. This would have been from a time when the Tutenkhamun treasures were in everyone's minds.

c) See: The cover of the Pink Panther #33 references the Egyptian book of the dead 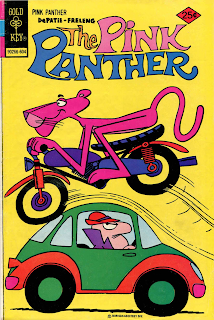 I think that Giger combined elements from the SPV from Captain Scarlet as well as "Philosopher Lecturing on the Orrery" by Joseph Wright of Derby , along with other things when he painted this painting, so perhaps in some way it's a sort of sarcophagus mobile


e)  Necronom IV references the "Egyptian book of the dead"

See: Necronom IV references the "Egyptian book of the dead"


f) Necronom V references the 'Egyptian Book of the dead"