Does the cover of The Pink Panther comic No.18
reference the Henu Barque? 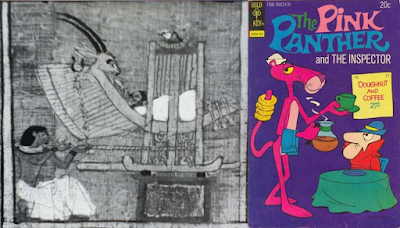 Leading from
20th century works inspired by the Henu Barque?
and
HR Giger: On The Trail Of The Pink Panther

The outer column of the fan turns into the doughnuts.

The wrist bands on the crouching man's arm merged with the idea of the skirt, turns into one towel hanging from an arm.

Perhaps that also means what looks like a puff of smoke above the crouching man's hand on the left inspires the steam from the coffee while the int-fish beneath the snout of the oryx becomes the steam.,

The oryx head becomes the Pink Panther's head while perhaps the horns are turned into the rim of the small hat on his head.

Meanwhile the boat itself becomes the upper right arm of the Pink Panther and the collar of Inspector Clouseau.