Prometheus: Engineer suit sketches in the background of a work studio

leading from:
Prometheus The Space Jockey / The Engineers
a) Two red sketches on the wall
Two sketches appeared in the background of a work studio photo on an engineer head.

The designs seemed well informed by the design of the original space jockey transplanted onto humanoid legs with its raised shoulders and a head close enough to the original.

However the illustrator has not been named. 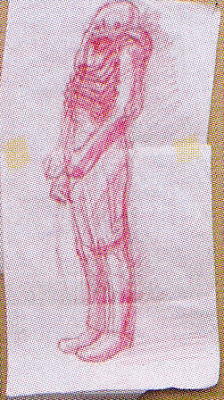