leading from
Guild Tug for Jodorowsky's Dune (1975) by Chris Foss
and
HR Giger's art: On The Trail Of The Pink Panther
a)  I do remember looking for what the tug illustration might have referenced probably over a year ago and it seems that since then I have found the Pink Panther connection the Henu Barque trail and since one Andrew Currie posted a link to an article about Jodorowsky's Dune on May 9th 2019, I looked at the spaceship again in the image for the link and thought, I'd better have another look, and so made the Pink Panther connection with this one too, and this Pink Panther comic book cover I believe was loosely based upon Francis Bacon's Study for Bullfight no 2 (1969), and after this, the other connections that seemed to have a lesser sense of odd character in this painting came to the surface, that I had known about for quite some time. 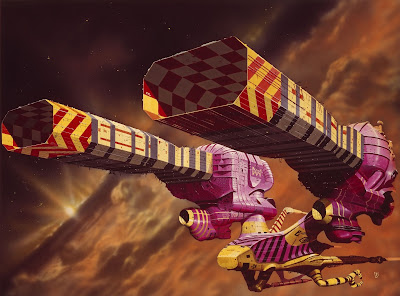 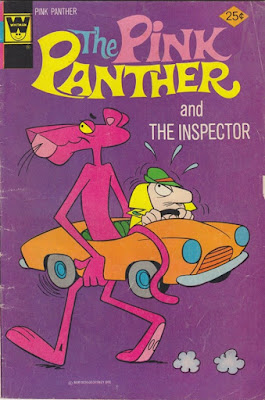 d) Pink Panther head and upper body become the engine on the right. 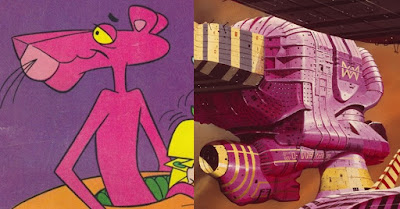 e) The head of the inspector becomes part of the engine on the left with his eye becoming the thruster intake and his collar becoming the raised arm extending from the centre of the ship.

f) The car becomes the main body the ship with the front bumper becoming a limb with claw.

g) The titles become barrels of the main thruster intakes