Alien: Alexandre O Philippe's Memory -The Origins of Alien: The design of the Alien life forms 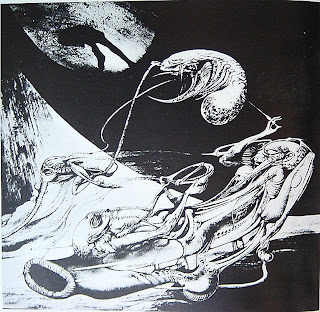 a.ii) Die Atom Kinder
He then showed the Atom Kinder that appeared to be a pair of unipod humanoids with the same head as the Astroeunuch character
a.iii)  Space Jockey like corpse in Giger's Chiquita (1972)
He was also able to show an image later a loosely humanoid corpse in one of the pods seen in one of the paintings Chiquita from 1972 which also resembled very much the space Jockey. 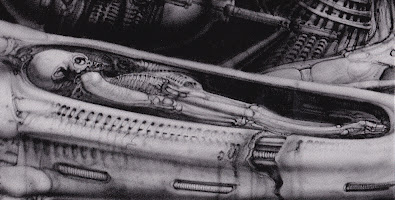 d) Identifying Necronom IV (work 303) (1976)
The Necronom IV painting was created in 1976, the year that Dan was working on the early version of the script called Alien 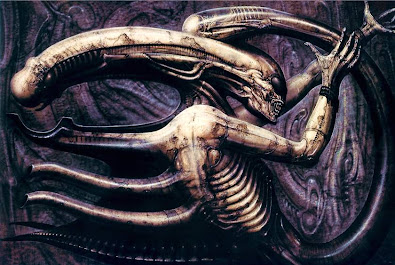 e) Necronom waiting to be the alien beast?
He thought about how the painting existed already when Dan O'Bannon was working on the script (although it was painted during that year), that it existed before Ridley Scott was even thought of as the director, but it felt like that the creature was waiting for the right story to bring itself to life.
f) Necronom IV was only a couple of years old anyway
While AO Philippe appeared to think that that the painting existed in the Necronomicon book years before Dan showed it to Ridley, the copy of the book that Dan O'Bannon had was from the first batch printed in 1977 with the intention of showing it to whoever it was important to show in the Alien film production, while it would get to Ridley when he said yes to the script and  came over to Hollywood for a visit, between the end of 1977 to the beginning of 1978

For the purpose of Philippe's poetic realm, the myths that he may have been weaving in perceptions and misperceptions as well have been a reality as it can be for many.
g) When did the Necronom IV begin to take form?
It's not easy to say how early the seeds of the Necronom IV came into Giger's mind or when he had the idea of calling his book the Necronomicon, but they finally manifested as it coming through from a timeless age, and what led Giger to create that painting obviously was starting to form over a long period of time with his idea for biomechanics which would lead lead to encounters and connections with various people who would surely help to set off ideas.
(See also HR Giger: Necronom IV (work 303) (1976) )