leading from
Prometheus: Jon Spaihts writes a script
a) The space jockey revelation
The direction it was going was that the alien life form was found in a derelict spaceship on a remote moon
that hadn't played a role in what he referred to as 'the human story'.
Inside we we see the cadavre of a colossal alien giant with an elephantine face known to many as the Space Jockey, who’s clearly fallen victim to an alien lifeform itself, and of course in spaceship's hold full of eggs that hold the alien life form.
As far as Spaihts was concerned, rathet than assuming that the alien life form had been waiting on the planetoid for a near endless period of time for another life form to come along, Spaihts decided that
whatever that giant alien known to use as the “Space Jockey”, and his kind somehow brought the Alien life form here, presumably to the planetoid
That meant the prequel really ought to be, in some respect, the story of the Space Jockeys, but he didn’t think it would be easy to make a popular film starring a bunch of what he decided were 14‑foot elephant giants.
It seemed impossible for him to imagine an audience or at least a mainstream audience connection wit a giant movie about a fourteen foot tall elephant like monster on another planet speaking an alien language with subtitles
b) The Space Jockey's human story
So the only way he could think of to tell the Space Jockey's story prior to Alien and the discovery of the derelict ship is to somehow make their story somehow our story,
If their story is somehow the human story, then on the scales that they were talking about in time and space considering the age of the derelict ship in the first movie, the Space Jockeys would be playing a role in human history,
c) Von Danikenisation
Suddenly his thought about these ancient giants made them into the Erich Von Daniken style aliens who meddled in human evolution and development.
These were now the beings from outer space who might have helped raise humanity's early monuments,  build the pyramids and, perhaps, even to shape the development of the species itself.
d) Tapping into man's earliest mythologies
It would would tap instantly into a whole vein of modern mythology that essentually knitted primal fascinations of early religion and folklore to our present day sense of the unknown.
So these aliens as helper help to create an ur-mythology that stretches from the boundaries of our knowledge now, where 'our god of the gaps' lives, and all the way back to our anciency conceptions of Mount Olympus and gods of death and dreams from early history.
In his mind, fully formed came this notion that they were the creators of the human race on earth.
e) Questions about the facehuggers
But why were they in a spacecraft filled with deadly human parasites and why hypothetically did the xenomorph seem to be perfectly adapted to killing human beings when it clearly didn't evolve where human beings were. It was also capable of pupating inside a human body and was compatable with human chemistly.
He went even as far as to think that its gross invasive proboscis was perfectly matched to human anatomy like a humming bird's bill to a flower and he wondered how that could be, even though by Alien 3 we would discover that they were adapted to infecting either dogs or oxes, depending on whether you watched the theatrical or extended cut of the Alien 3 films,
Of course we can known that Ridley was going along with the idea since the original Alien production that these Face Huggers will infect any life form that they could land on that would include cats and dogs, any other animals as well, and then take on a similar body shape.
But Spaihts answer to all of this was that these alien gods made them to kill the human race and so that was the seed of his story, which he near enough jumped in and started telling. In a space of half an hour, he sketched out to them what would remain as most of the major movements in the final film and of course a lot of embellishments would come later. 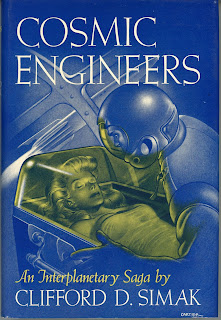 f)  Engineers of the cosmos reveal a human face
Spaihts called them the Engineers and imagined them as the ones who fomented sentient life on earth and then schooled that life into their own image, both cognitively and physically.
We might look back to Clifford D Simak's 1950s novel "The Cosmic Engineers" when considering that term.
With that, in his story,  the closing idea was that that elephantine alien face of the space jockey was merely a mask and underneath it, to our astonishment, it would be revealed that they looked like humans or, perhaps more accurately, that humans looked like them.
Posted by wmmvrrvrrmm