Derelict spaceship scenario from the 1973
Star Trek the animated series episode ,
"Beyond The Farthest Star"

leading from
Alien: Trails of inspirations for the derelict ship
and
Alien: Space jockeys origins in Swiss Family Robinson
and
Alien: Echoes of ideas from the stories of Star Trek The Animated Series 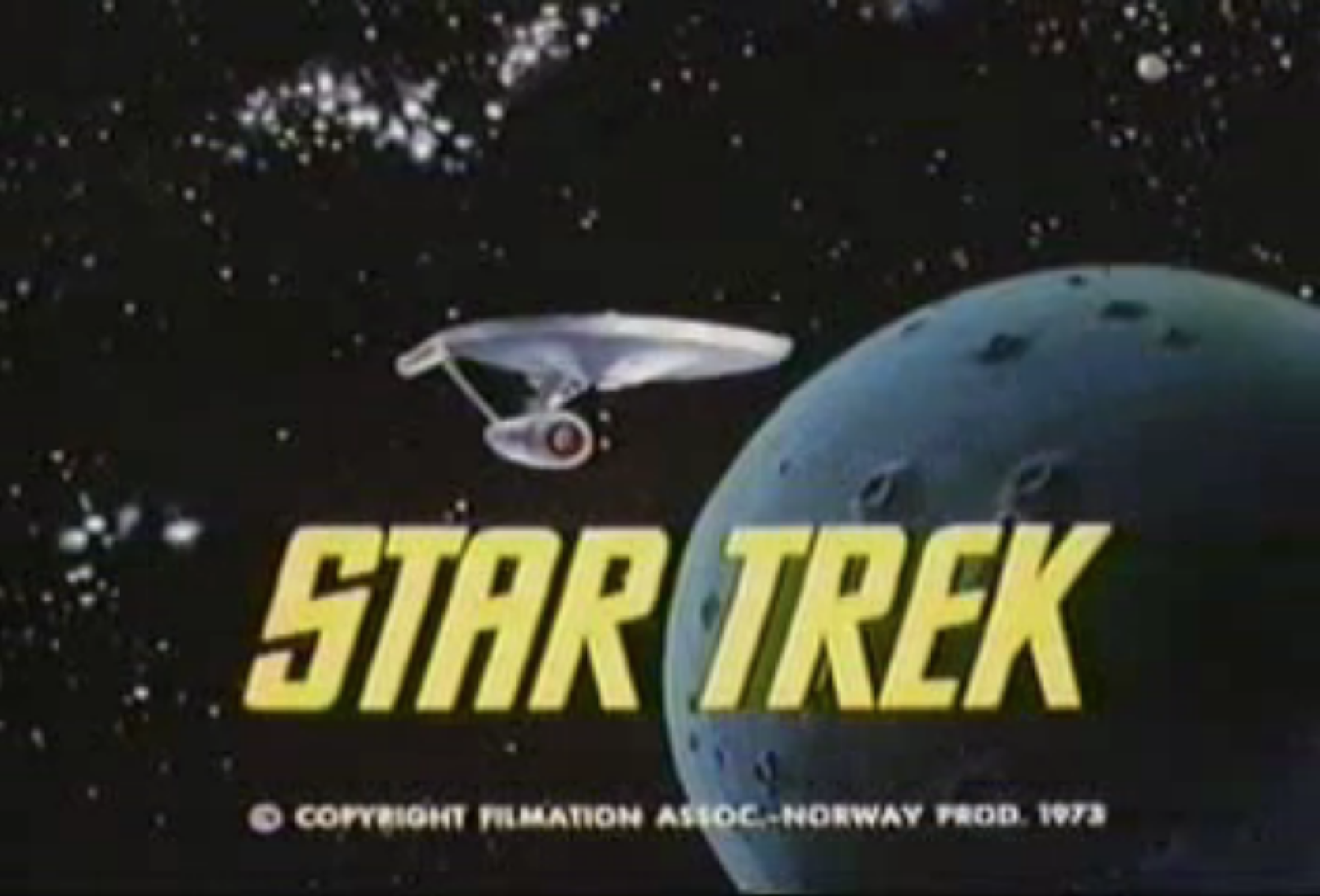 a) Beyond the Furthest Star
It also just so happened that Alan Dean Foster who wrote the Alien novelisation , wrote the novelisation for "Beyond The Farthest Star" which would feature in Star Trek Log One published in 1974 and he would also write the novelisation for the movie Dark Star that came out the same year. Also Foster had collaborated with Shusett on turning a couple of Robert Bloch short stories into film material, since Shusett had the rights to them much like the way he had the rights to Dick's "We Can Remember It For You Wholesale".

Perhaps the great Dan O'Bannon had been watching the cartoon series in 1973 on television or checking up on what else Alan Dean Foster had been novelising when he wrote the Dark Star novelisation.  The cartoon was scripted by Sam Peebles,  he seemed to have been interested in the idea of a spaceship that could be a living creature that's used to going from one planet to another.

The book Star Trek: log one featuring the novelisation of this story had been released in 1974. So a key feature would be the fact that an ancient derelict ship with a strange alien transmission pulling people in, an ancient alien message that needs translating, and a strange isolated planetoid where the evil which invaded the derelict comes from (although in this case appears to be the remnant of a star.)  Of course these sorts of tropes pop up in other stories and films elsewhere in other forms, for instance anyone one might easily compare the exploration of the derelict to the 1956 movie Forbidden Planet with the Krell city. 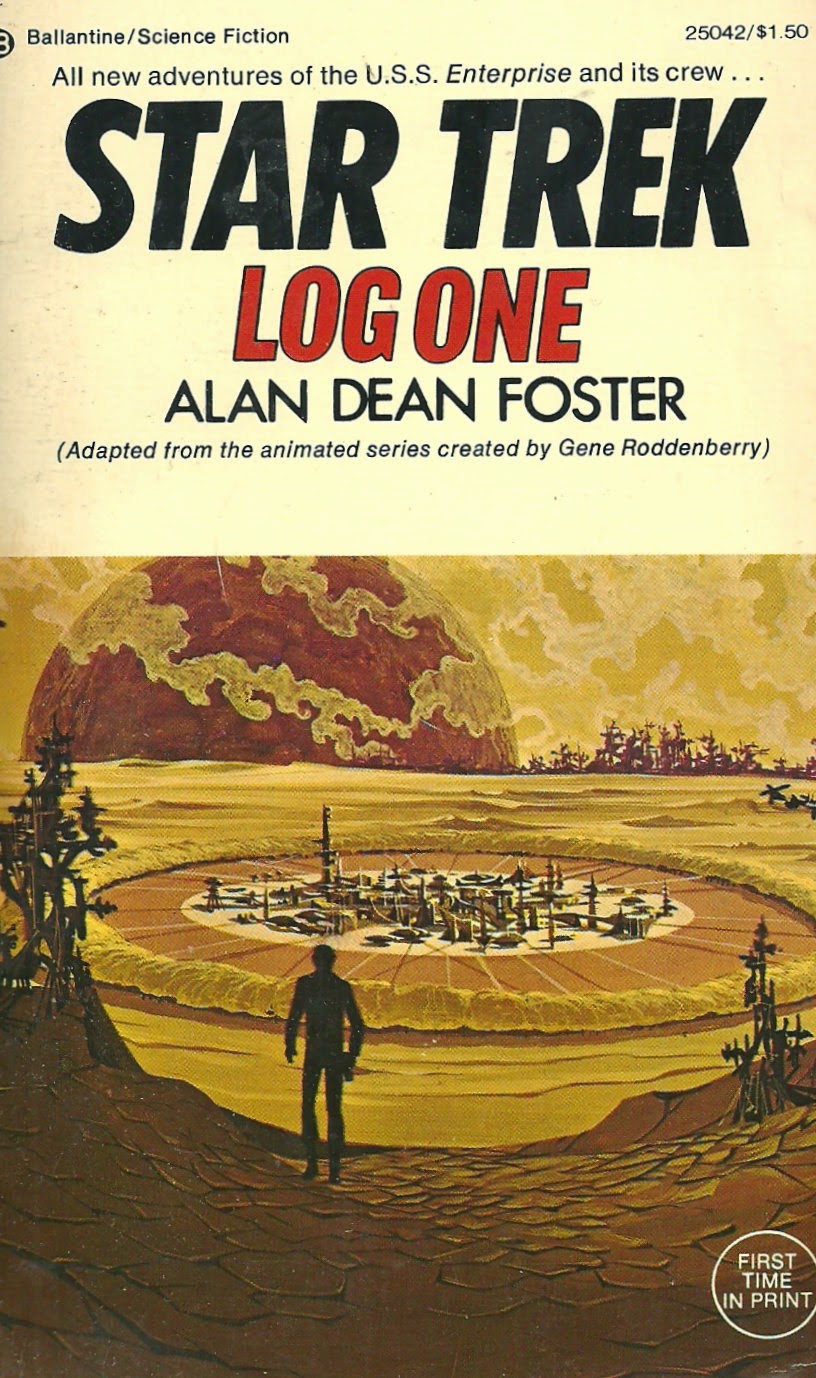 b) Derelict ship orbiting a moon
The series featured Captain Kirk, Scotty, Spock and Bones amongst other familiar cast members in an animated form. This episode was made and featured on TV in 1973.  The Starship Enterprise is lured beyond the fringe of the galaxy to Quester M-17, source of mysterious radio emission and they are there for the purpose of star charting. 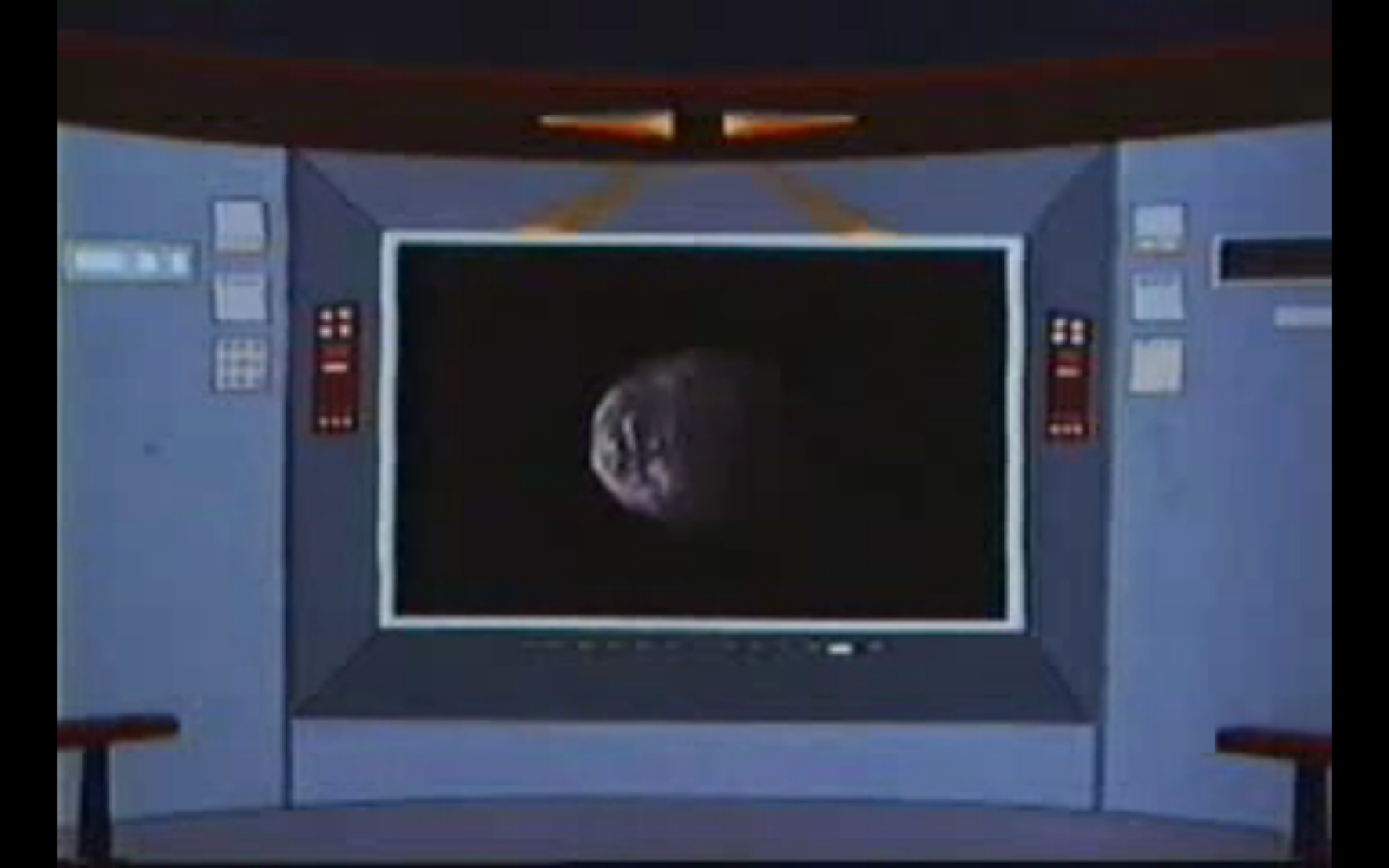 However they are caught in the gravity of a negative star mass in the form of a moon, but manage to get into orbit. They discover that it is the source of the radio emission and its origin is a vast and very alien derelict spacecraft that's been in orbit for 300 million years 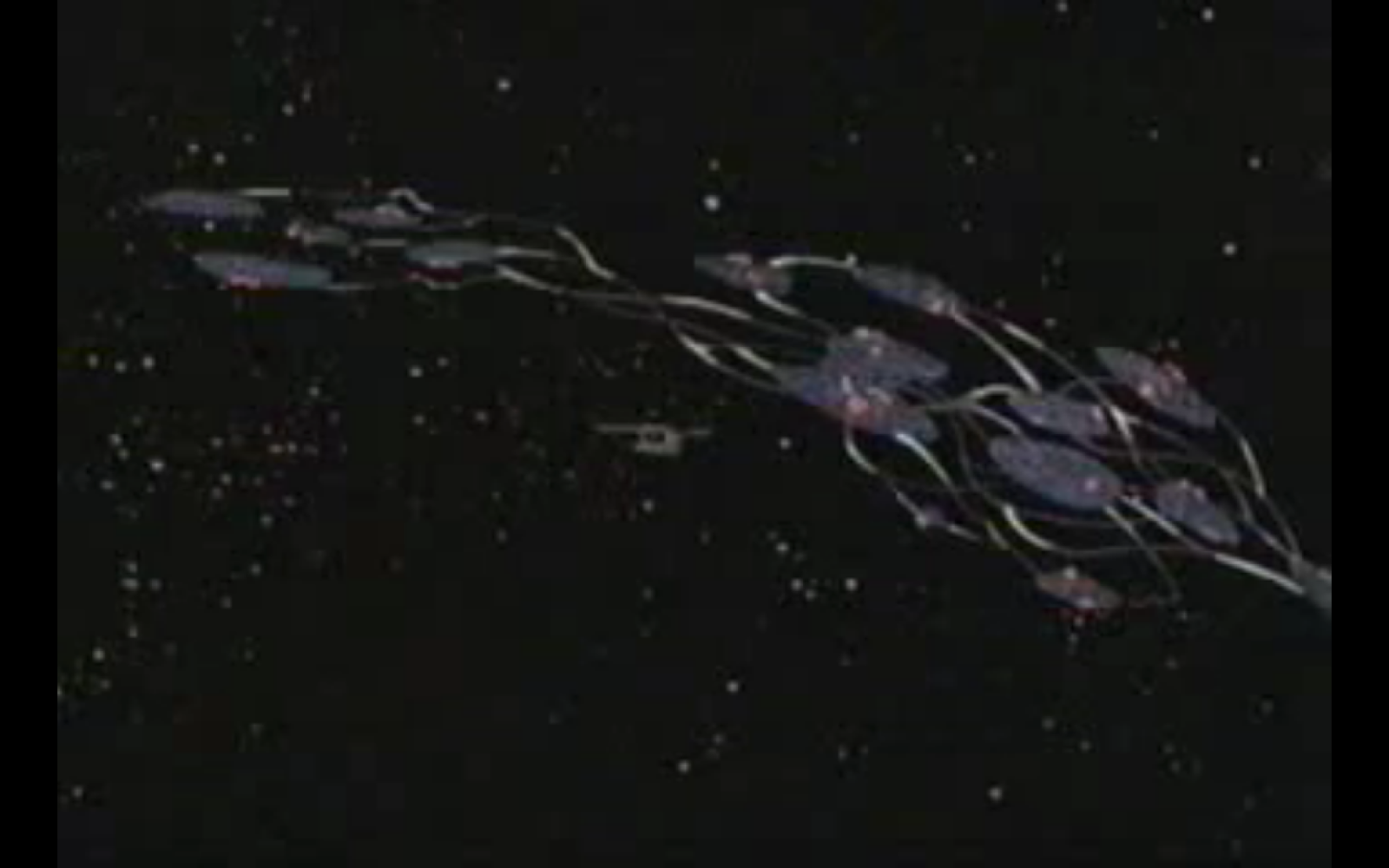 c) Boarding the derelict ship
Boarding the vessel, Spock finds that it's hexagonal shape of its windows suggests a similarity to natural insect designs of Earth, namely as the honeycombs of bees. The individuals cells are shaped like it. Scotty notes that the metal that the hull is composed from isn't cast or rolled, but is drawn into filaments and spun. Kirk adds that it is as a spider spins its web. Spock notes that it is a stronger and lighter material than anything Earth technology in their era. 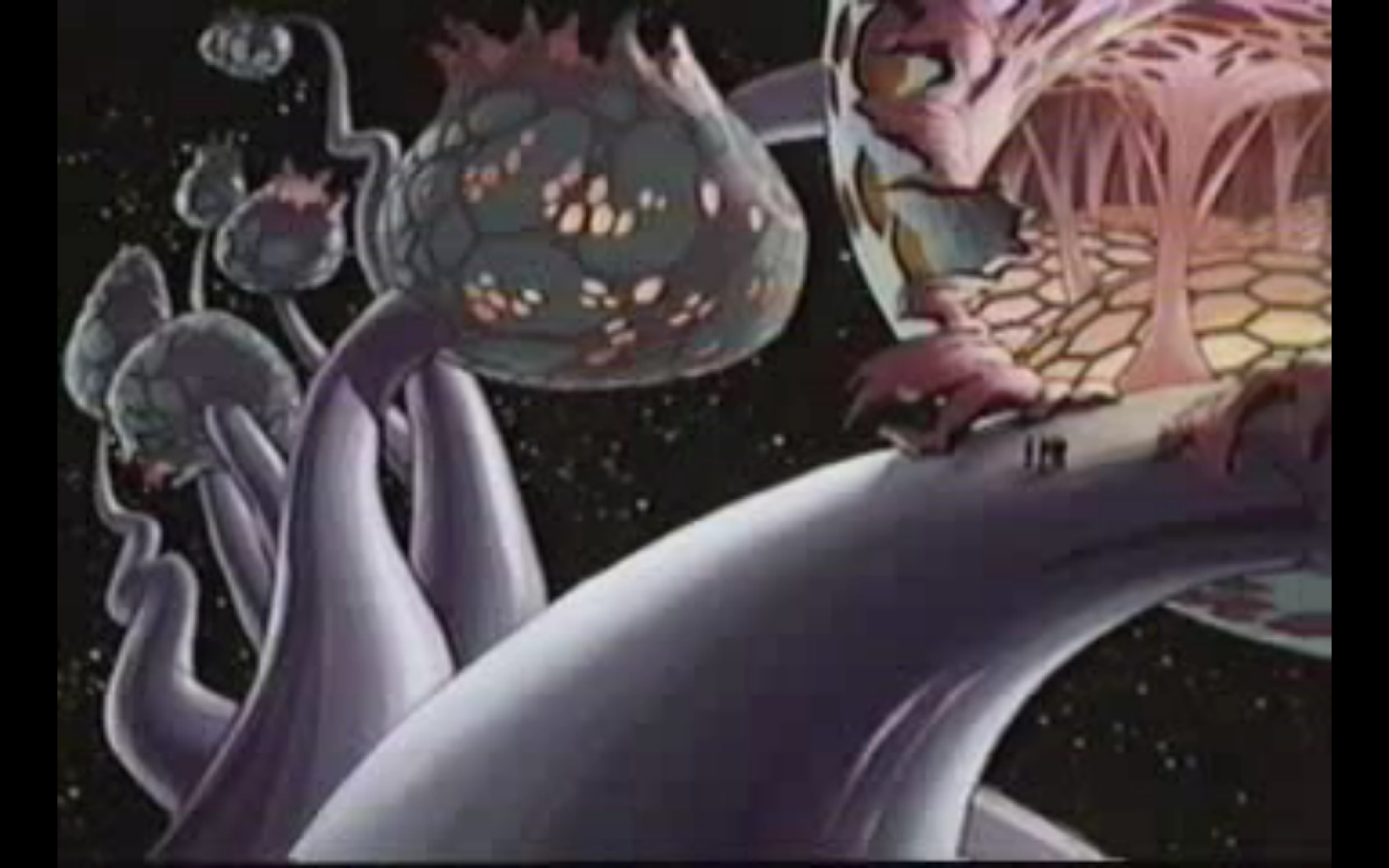 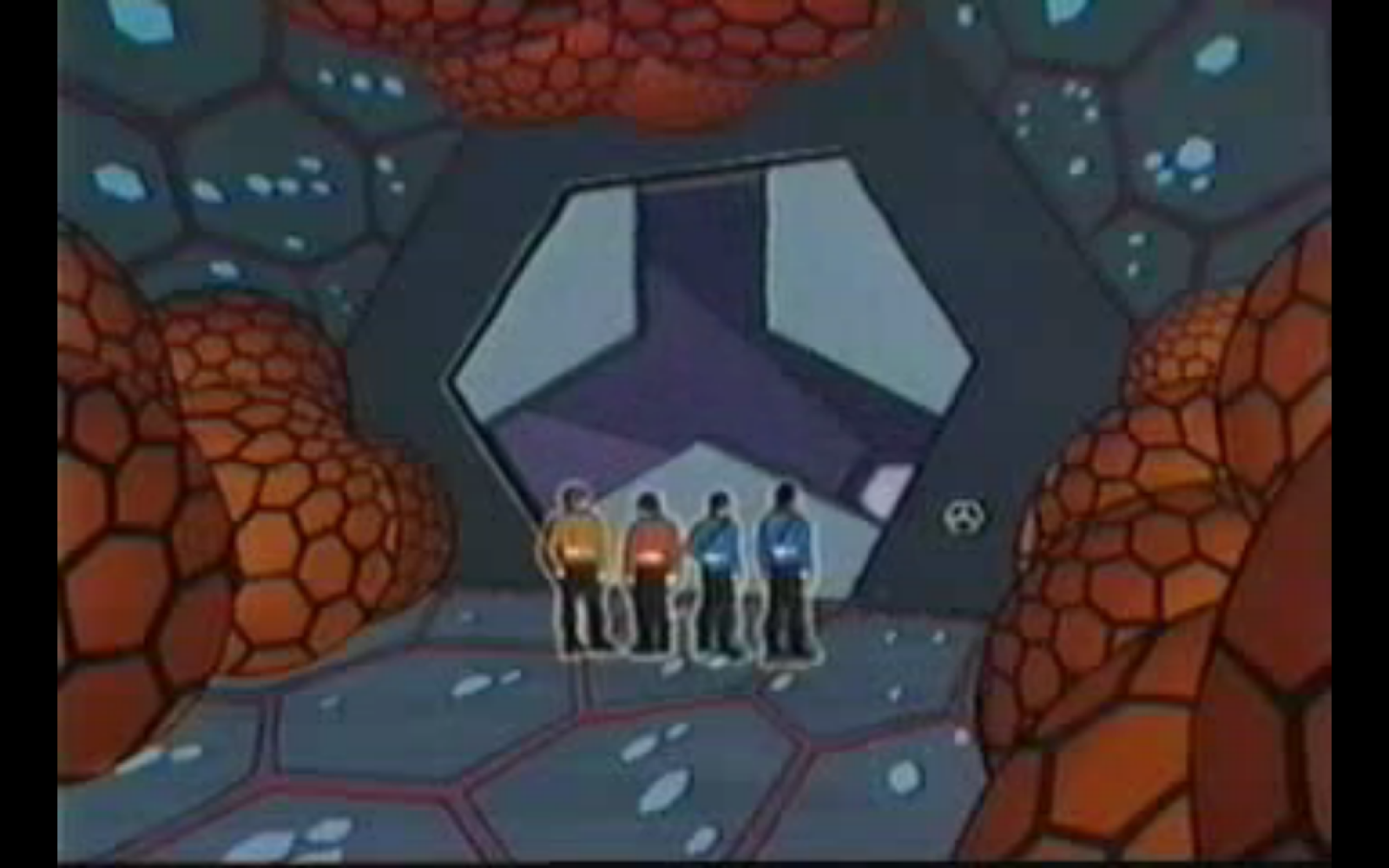 d) Message from a long dead space alien
The alien crew left a warning transmission behind that Spock was soon able to get translated using a computer aboard the ship. As it happened, the long gone crew had sabotaged their own ship to stop some other alien life form that had taken over the ship from using it to allow it to get to some populated area. On the large hexagonal screen, an extra-terrestrials face. Perhaps this face inspired the dead extra-terrestrial pilot in Ron Cobb's painting of the alien space pilot

The message would only be heard in the control room.
The message translated into English was "...danger.. the dead star, we are being drawn to it. Rather than carry this malevolent life form to other worlds, we have decided to destroy our own ship. There is no other answer. If you understand this message you are protected in this room only for a moment. This thing is wants."

In Alan Dean Fosters adaption of the script, the words are "Rather than carry this malevolent life form to other worlds, we have decided to destroy our own ship. The thing had been trapped here by the tremendous gravity-well of the dead sun. So it must remain. So, sadly, must we. We had studied the problem quite thoroughly in the time remaining. There is no other solution. The others are dead. Only I am left, to give warning. If you are understanding this message, comprehend that you are protected in this room only for a moment. The Thing... grows ever stronger... it wants..."

Soon this invader takes over the Enterprise who are able to outwit it and leave it behind on moon like  remains of the star.

One might want to talk about "Mario Bava's Planet of the Vampires" being the source of the idea of a dead giant alien pilot seen in Alien, but although O'Bannon might have appreciated the idea of a giant long dead skeleton and a derelict ship, Perhaps also one might want to think about the film "First Men On The Moon" featuring a city on the moon built by an insect like civilisation that were still very much alive, featuring hexagon shapes. "Beyond The Farthest Star" presented a long dead alien with a message about a battle with an alien creature from a moon and their willingness to sacrifice themselves 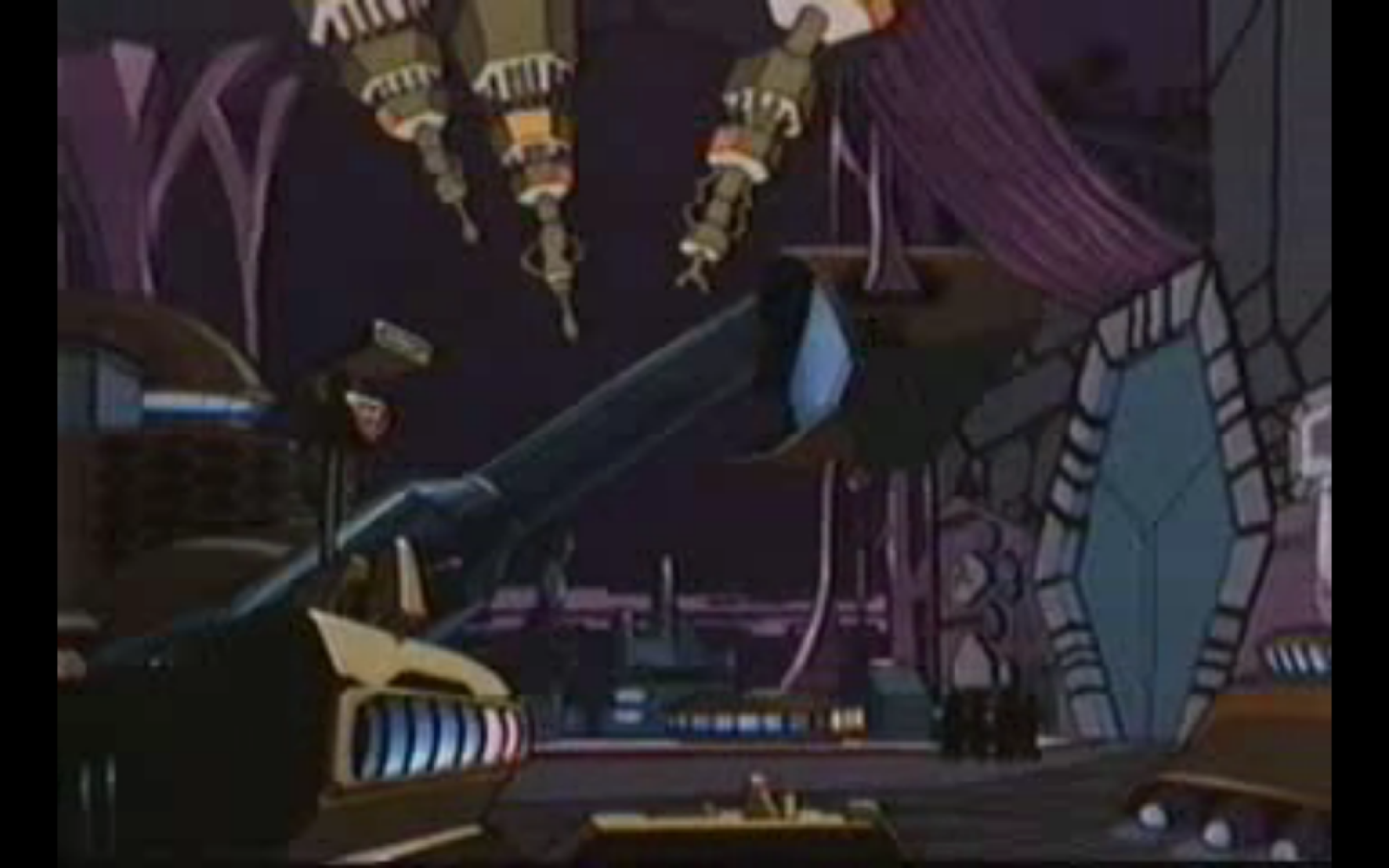 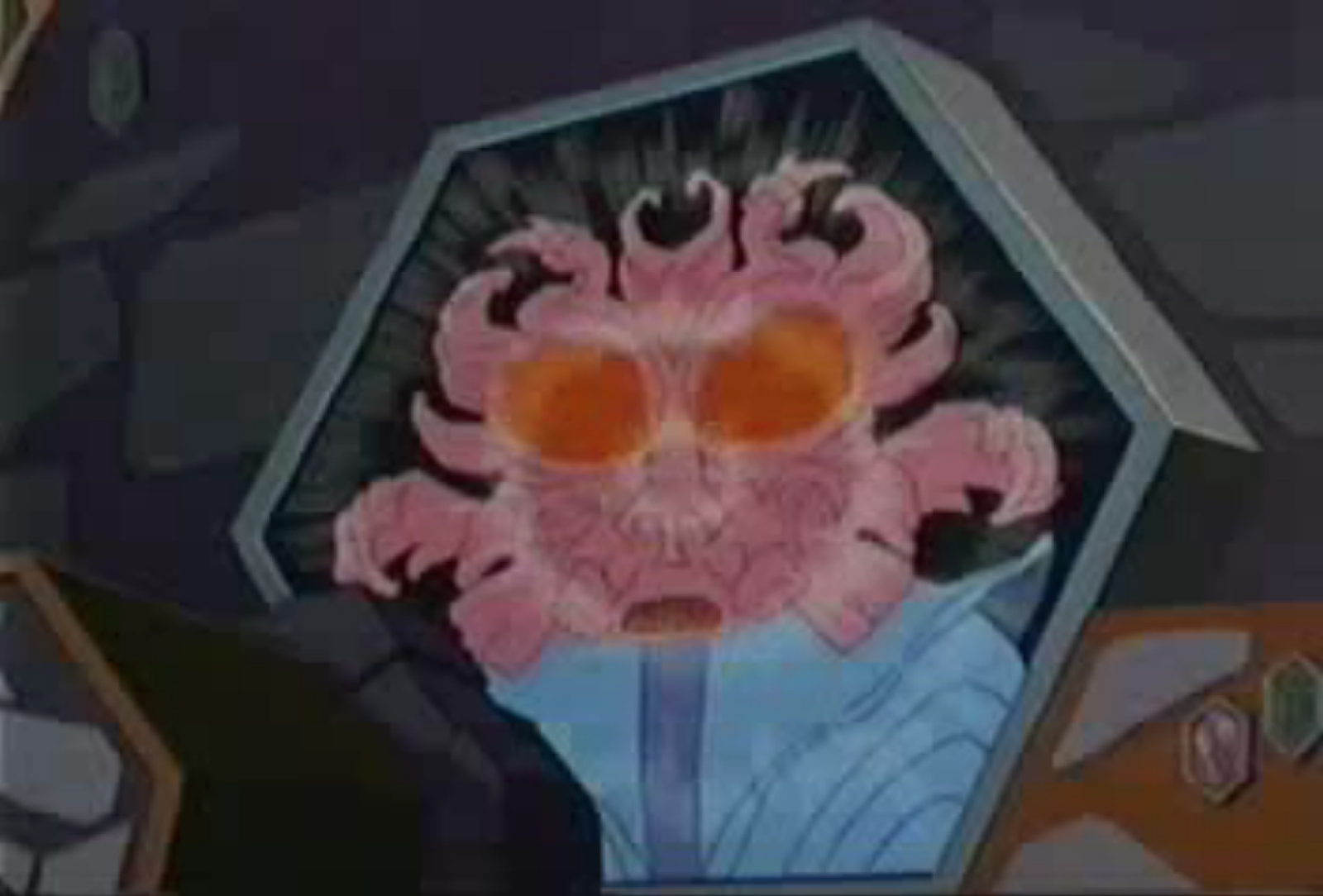