Alien: The biomechanoid that O'Bannon wanted?

and
Giger's Necronom series
and
Jack Kirby's Lemurian train bomb referenced Necronom IX?
and
"The Treasures of Satan" trail through the 1970s
and
The temptation of St Anthony trail


a) Thoughts on 7th May 2015
What we see of this painting seems almost quite unfinished or less specific in its details than some.  If one looks closely at it, it's speckled with white paint. This thing presents itself with a  bulbous head with a blade and insect leg on the head and around the head there might be a suggestion of a glass bubble or a transparent shell over it and is the blade cutting it away?

b) Under the The shadow of Pazuzu
Because of the bifurtated eye like forms, is it somehow the pazuzu head from The Exorcist? (See small-pazuzu-head-relic-from-exorcist) Is it some sort of an ocular device?


c) References to The Fly?
There is a hand squeezing bulbous end of tentacle coming from the side of the neck. Is it a sort of mandible. Does this thing have mandibles? There is a venus flytrap nasal cavity or are they like like hairs as on a fly or especially the mask in "The Fly" or it's sequel "The Return of the Fly " ".  If so perhaps the painting Necronom III had also been inspired The Fly films from the 1950s ( See also: Necronom III)
d) Realisation on 12th of May 2016
Suddenly taking a look at Necronom IX and Dali's "Daddy Longlegs of the Evening - Hope!", I noticed similarities in the structure because both the Dali painting and a drawing by Dan O'Bannon inspired by Giger's Necronom IX inspired Alien Monster IV.

I suddenly then noticed that the bottom of the floppy violin in Dali's painting became the phallus in Necronom IX, and the brown ground around it, beneath the face of the floppy head became the form of a hand for Giger's art.

Other structures in the background loosely transformed into the facial features of the entities face. 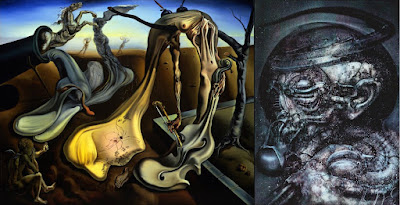 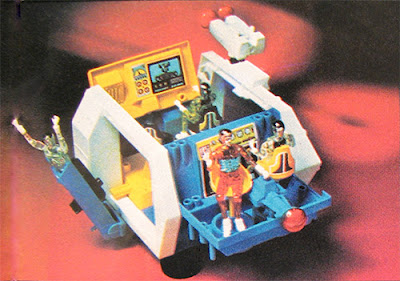 g.  Necronom IX references the cover for Astounding Stories (illustration for Edmond Hamilton's "The Sargasso of Space: An Interplanetary Adventure" from September 1931.

g.i) This piece of artwork appeared to reference the structure of Treasures of Satan and ideas from Temptation of St Anthony where St Anthony would be seen to be holding a cross to protect himself from demons.

Then this illustration may well have caught Dali's attention as well because of its possible sources of reference, as if there was this need to recognise a strong pattern in a lineage of ideas that was happening in the present amongst other artists as well as the past. 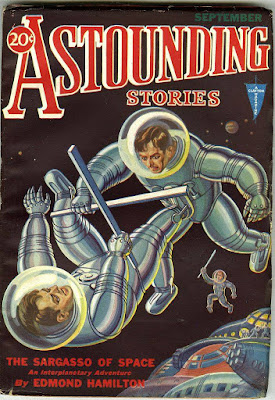