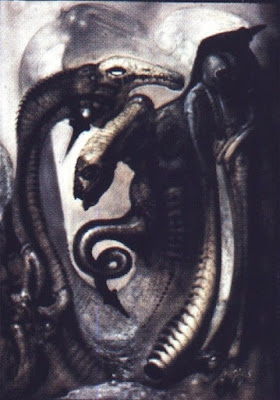 a) H P Lovecraft  ?
A landscape becomes a half suggestion of H P Lovecraft's face, with the worming thing on the right framing the jaw an cheekbone with the light upon the elongated head of a strange creature becoming the nose while its curling tales becomes the position of the mouth. A point of light that's a negative space above the long headed beasts head becomes the white of the left eye. There is almost not much at all to understand that there might have been the semi intention of having something shaped like his face since his face would have generally in his mind.


b) Aubrey Beardsley?
(22nd November 2015) Another direction to go with this if one has to face the utter doubt about who it, is that it might be Aubrey Beardsley's face, an illustrator who was an author and an illustrator, and with the latter part of the Art Nouveau scene which is a style of art that Giger incorporated into his own style and his face and ears had a general similarity to Lovecraft's general features. If there are any more clues in the painting, what we have to look at is so low in resolution that it is difficult to see and perhaps Giger really never aimed to make it clear.

Another painting Biomechanical Landscape II shows signs of a face reveals to me that it might be a sort of a cubist representation of Oscar Wilde who knew Aubrey Beardsley, but I can't really say it should be Beardsley or the Lovecraft, or maybe both together or neither specifically. He may well have been interested in that sort of face and would let it change into something for the sake of the other ideas coming to the surface painting, and so it wouldn't really matter if it was on person or another since they are both people who hold the respect of many people in the creative world.