leading from
Alien vs Shivers vs High-Rise
and
Alien: Afterthoughts
and
J G Ballard 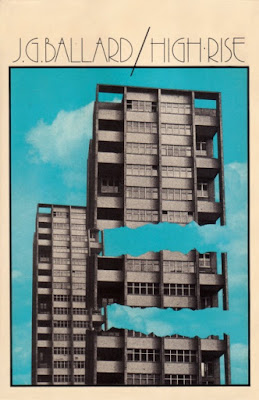 a) The High-Rise plot (taken from Wikipedia)
J G Ballard's novel High-Rise was released on the 13th November 1975. The story features a high rise tower block in which the occupants divide themselves into the lower, middle, and upper class, as the lower class are those living on the lowest floors of the building, the middle class in the center, and the upper class at the most luxurious apartments on the upper floors.

The building gives its well-established tenants all the conveniences and commodities that modern life has to offer: swimming pools, its own school, a supermarket, and high-speed elevators. But at the same time, the building seems to be designed to isolate the occupants from the outside world, allowing for the possibility to create their own closed environment.

It does not take long for the occupants of the entire building to abandon all social restraints, and give in to their most primal urges. The tenants completely shut out the outside world, content with their life in the high-rise; people abandon their jobs and families and stay indoors permanently, losing all sense of time. Even as hunger starts to set in, many still seem to be enjoying themselves, as the building allows them a chance to break free from the social restrictions of modern society and embrace their own dark urges and desires. As the commodities of the high-rise break down and bodies begin to pile up no one considers leaving or alerting the authorities.

In time the tenants abandon all social and moral etiquette. As their environment gives way to a hunter/gatherer culture, they gather together in small clans, claim food sources from where they can (which includes eating the many dogs in the building, and eventually even the other tenants). Every stranger is met with extreme violence. 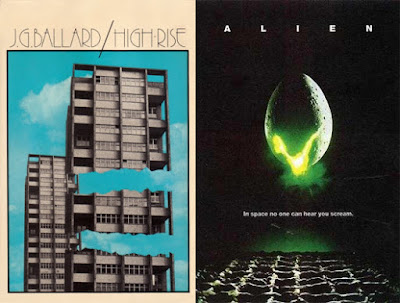 b) Did J G Ballard's High-Rise inspire the class divided spaceship in Alien?
Meanwhile there was the idea of focusing on sending J G Ballard the Alien script for him to novelise although he wasn't interested in the script and didn't see anything of the actual set. However what can be said about the Alien script that would be interesting is that it showed the division of economic classes segregated to different floors.

When he made Alien, Ridley understood that he had a class system going, with Brett and Parker below deck complaining about their lower shares while the rest, Dallas, Lambert, Ripley and Ash in the upper deck living in the crews quarters that would in Ridley's mind be comparable to the staff quarters of the Hilton Hotel, had higher shares. The whole design of the Nostromo interior was an interesting 1970s projection into the future based on what they had back in that time as technology to base their credible views on.

There would also be the issue of trying to compare the high-rise building to a spaceship. Life in the building, a self contained appeared to be like living on a separate planet where the outside world seemed like another planet entirely. With all of this mental interplanetary travel taking place in the novel perhaps, while it did not say that the buildings were like spacecrafts one could go as far as to say that living in these buildings might have been like being on a spaceship (which was the impression that Ballardian scholar Rick McGrath had when he wrote his essay "Reconstructing High-Rise" back in 2004)

On the other hand, in High-Rise lead character Laing lived in an expensive appartment with "a studio living-room and single bedroom, kitchen and bathroom dovetailed into each other to minimize space and eliminate internal corridors. Laing remarks in the novel, "The architect must have spent his formative years in a space capsule-I'm surprised the walls don't curve...”  So in that respects, the idea of a comparison to living in a spacecraft comes to the surface.

When David Cronenberg made Shivers which was released before High-Rise was that same year, he was also having the general same idea when he decided to have the building in which his story takes place named "Starliner Towers"

Also Alien borrowed names of the space ship Nostromo and its shuttle Narcissus from Joseph Conrad novels, and the writer was someone whom J G Ballard was thought to have been inspired by when he wrote Crystal World (1966) but as it turned out, Ballard would deny that he had been. However Ballard read the Alien script, he didn't find it interesting but over time he would come to find the actual film valuably interesting. (see also: J G Ballard on Alien and HR Giger)