a)  Looking for more inspiration from Max Ernst
Giger's Witches Dance (work 341) (1977) features two females with mask dancing around perhaps a toilet with mutant spirits clinging to their legs. On the 13th January, after making the connection between Giger's Necronom III and Max Ernst's Celebes, I looked at Ernst's other works and begun to wonder what else might have served as inspiration.

b)  Noticing Robing of the Bridge
Suddenly on 13th of January 2016 around 1pm,  I looked at "Robing of the Bride" (1940) b and saw a similarity, the head dress of the woman on the left in Giger's work seen from had a similarity to the woman's head dress on the right of Ernst's painting.  I looked at the spear as well held by the green bird man and the arrow stuck into the side of the robe and thought about the spikes emanating from the toilet bowl. 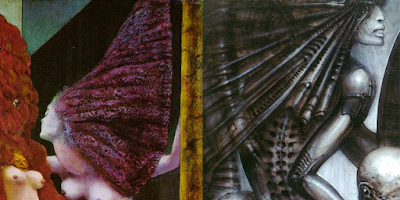 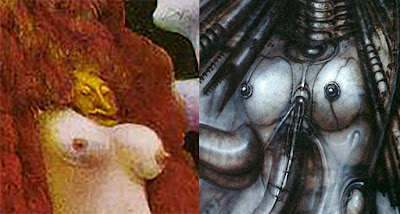 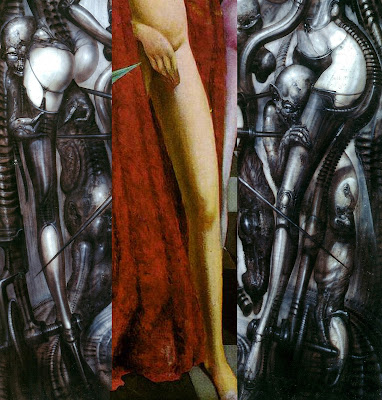 e) Central upper and middle torsoe becomes toilet seat and lid with heads
The the shape of her head dress would become the toilet seat in Giger's painting and the robed woman's should would transform into one of the heads in the centre of Giger's painting being fingered and this would then become doubled.  Perhaps her belly and groin as well as the woman to the left's becomes the shape of the toilet or urinal featured in the centre of the image. 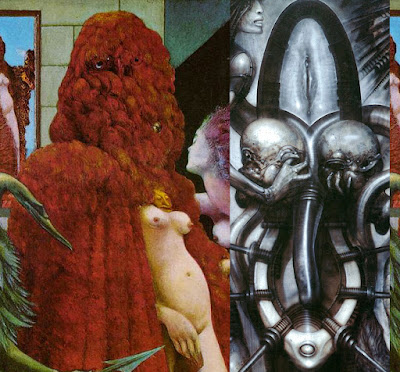 f)  Green demon and Giger lemures
Meanwhile in the bottom left in Ernst's painting is a small deformed green demon with a bloated belly and four small breasts, and only showing one of its eyes. I wonder if perhaps the roundness of the belly and its close proximity to one of the legs gave the Giger the idea for attaching a wheel to the legs of the witches as seen in the paintings 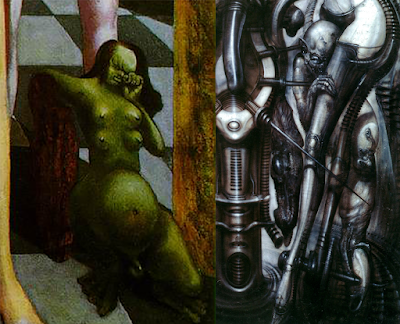