d) Homage to David Lynch!?
It's the 7th of June 2019, and I've noticed in a document "L’HORRIBLE : UN MOUVEMENT ARTISTIQUE Le regard moderne de HR Giger by Laura Wojazer  that this painting's name has changed slightly with "Homage to David Lynch" added.  (see: https://docplayer.fr/13468232-L-horrible-un-mouvement-artistique-le-regard-moderne-de-hr-giger.html)

Giger had traveled to New York at the end of 1977 to take part in an art exhibition. the film Eraserhead was being shown. Of course, he went to see it at the advice of Mati Klarwein, and loved it. (See "b) Advice from Mati Klarwein while in New York" in Alien vs Eraserhead)

The fetal head in the painting is barely visible but it almost animal like almost like the idea of the baby in Eraserhead, and perhaps he painted it from memory. With that, the painting was created towards the end of the year and so the association falls into place. 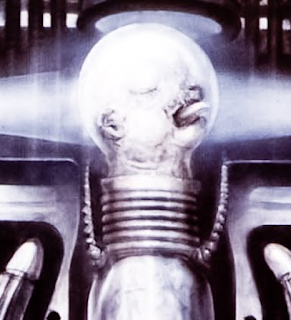 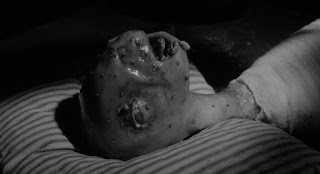