a) Illuminatus curiosities
In February of 2015, on the Facebook page of Bijan Aalam, people were having a discussion about what the numbers on the razor blades meant and who the faces were in this painting. The faces on the left had been well known, the narrow face on the right hadn't been identified. On March 14th 2015, I took it upon myself to take a better look at this image and identify the face on the right and then realised what inspired the painting.

b) Illuminatus Trilogy
Starting in September 1975, Robert Shea and Robert Anton Wilson's satyrical Illuminatus Trilogy was published, their titles were The Eye in the Pyramid, The Golden Apple, and Leviathan. The ideas featured in these novels quickly pushed their way into popular culture. Carlos Victor Ochagavia provided for the original book covers that may well have provided a starting point with their mysterious circular forms, central eyes, apples and tentacled amorphous monstrosities for Giger to transform with his own creativity. The eye had become transformed into an Egyptian Eye of Horus. (Also see: Eye Of Horus / Wedjat) 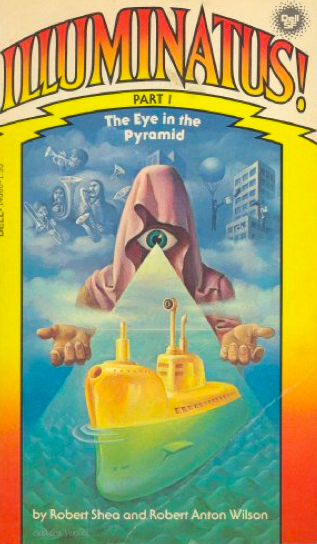 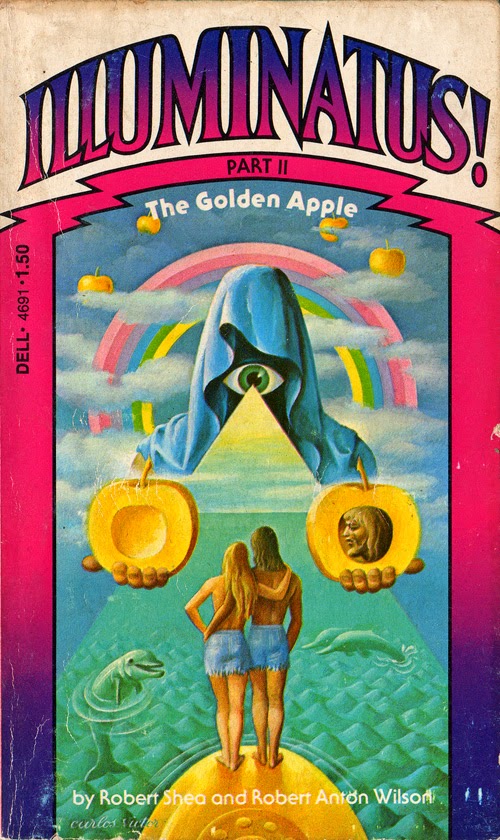 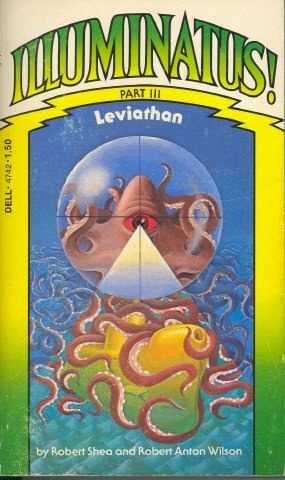 
d) Incorporating friends into the image
In 1978, HR Giger had painted the picture called Illuminatus, On the left, he included faces that have been established to be those of his long time friend Sergius Golowin, well known Swiss Mythologist and also Timothy Leary, the "high priest of LSD" who Giger got to know but not too well. When Leary was in Switzerland in 1971, hoping to get asylum so he could stay there and not go back to prison in America, he was looking for a place to hide because they wanted to put him in jail. Giger's father who was a pharmacist and knew about Leary being in trouble. Giger was collecting signatures for Leary, and when his father suddenly found out the association asked him "What are you doing with this guy?"  Giger didn't tell him that he was trying to get help for Leary because his father would not have been pleased. Giger didn't get to meet Leary at all during that time and it wouldn't be until they met in Lost Angeles when Leary wrote two articles for Giger's books which Giger was very pleased with

e) Virgil Finlay drawing of HP Lovecraft
On the right, he included a face that bears a vague resemblance to the famous Virgil Finlay  (1914-71) drawing of HP Lovecraft wearing a periwig, although Giger for some reason added a split chin and probably left the identity confused. But I think that the hairstyle in combination with general shape of the face with the placement of the cheekbones, with the mouth and the shadow of the eyes definitely suggest that it is.


f) Strange goblins on stilts
At the bottom can be seen most of the bodies of three strange phallic headedcreatures with tentacles as arms and long ears that appear to merge with where the eyes should, and if they have eyes, they might simply be pustules. The closeup head of another is found at the bottom left of the picture. These things are balancing on stilts and stuck to their stomachs have razor blades numbered 5, 17 and 23.  Robert Anton Wilson talked about the number 23 as being part of the cosmic code, and is connected with so many synchronicities and weird coincidences that surely it must have meant something but he didn't know what. He also identified a 23/17 phenomena and that both numbers were tied to something known as the Law of Fives which he explores in his books

Perhaps the long legs are loosely inspired by the presence of compass dividers and also On the cover of Cosmic Trigger I: The Final Secret of the Illuminati, take note of the people on the hill with shadows of the legs extending across the ground as if they were stilts. The goblin like ears might be inspired by the well known Sutton Farm Extra Terrestrial encounter from 1955. If the encounter is not well known itself, as least the images of the goblin like extraterrestrials were, and the ears would have been enough to capture Giger's imagination without thinking anything too serious about the matter.


g) Safety Pin Sunglasses
HR Giger had created a pair of safety pin sunglasses. He incorporated the idea of them into his cover for the Magma album Attakh in 1978 and also used them on the face in the centre of the Illuminatus painting but this time actually seen to pierce through the mouth from the side. The face is typical of the way that he painted his late girlfriend Li Tobler. Indeed the question to now ask is which came first , the actual sunglasses or the painting? What is known is that year, he cane up with an actual pair of sunglasses made with the help of R. Christoph.


h) 23rd October 2016. Planchette comparisons
After taking a look at photos for the Ouja: Origin Of Evil movie that has recently come out, there is an image of a young girl holding a planchette from a Ouija Board set. I take a look at that the central circular shape of the Illuminatus painting which intersects with a triangle so that they look as if they are forming a rounded shape with a point at the top making it resemble a teardrop shape and there is an oval shape near the top, I begin to think that it must be a planchette. These devices do come in different shapes and sizes, often heart shaped with a cutout circle is found by the pointed tip.