a) Foundations in an illustration from The Golem
Much like the starting point of Biomechanic Landscape ii (work-319), Giger took a certain illustration from The Golem, here it is only the architecture. The divide of the arched ceiling became my first clue as it is shown in the first stage, and then I noticed that the railings on the top left had been transformed into wings. 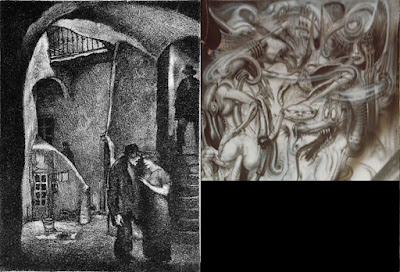 b) Stairway and arched entranced transformed into a female
The post at the bottom of the stairs on the left became a phallus penetrating the anus of a female figure and her spine generally follows the direction of the banisters of the stairs. The arch entrance at the top of those stairs becomes the head and curling tentacle coming from the back of the woman's head. The railings original became part of the back of her head until it had been painted over.


c ) The right stairway
The arched entrance on the right become the coiling form above the head dress of the woman that I have decided is Kookaburra and also a Nautilus cephalopod. The right stairs become a hanging ribbed form ending in the face of a small animal face with puffy cheeks and hollow spaces for eyes and a dome covering the flat head and pointed ears, that comes down right next to the Pluto dog, 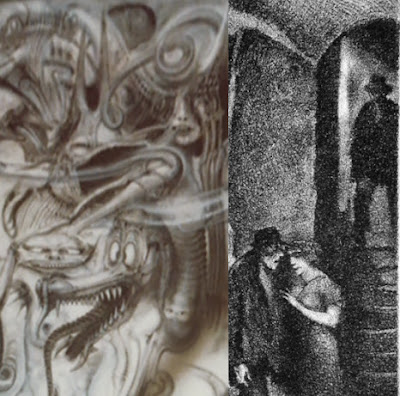 d) The chatting couple
Perhaps the chatting couple in the drawing become the floating wide head of a human that generally conforms to the shape of the shoulders of the man and the woman's arm transforms into the snout of the Pluto dog, her breasts become the eyes of the creature and her upper arms become the ears.  Her mouth extends to become a parted beak or pincer extending from another tentacle stretching from the left of the image. 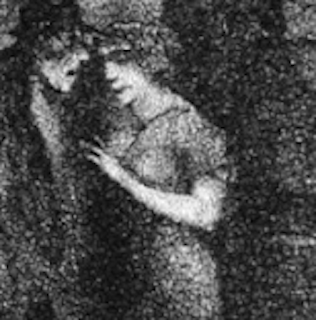 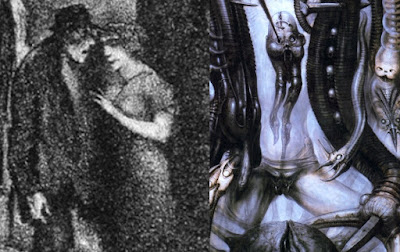 f) Leaping back to the Aaron Wassertrum illustration from The Golem
Again Giger goes back to the illustration of Aaron Wassertrum from The Golem , turning the large nose into a deformed cheek, the cheek already existing is bloated out, the hat transformed into a phallus, the ear into an eye and the eye on the far right turned into an ear, and an eye at the centre of the image of his eye almost retains similarity. However it is this face where we can almost see the vampire fangs protruding from its mouth. (See: Biomechanic Landscape II (work 319) inspired by artwork for Gustave Meyrink's The Golem) 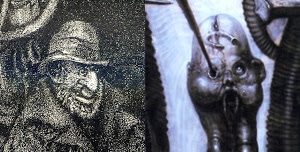 g) Left stairway , arched entrance and support wall
In the final version where the dark shadowy entities are added stretching from top to bottom, the one on the left seems to once again be the arched entrance on the left at the top of the stair. The support wall with a diagonal top on the right of the left image has transformed into a strange tentacled face, while he arch on the right has become the strange bulbous shoulders of a monstrous creature, and perhaps the man at the top of these stairs has turned into this dark entity with his hat turning into the jaws and the rest of his body begins to merge with the stairs transforming into this tentacled thing. 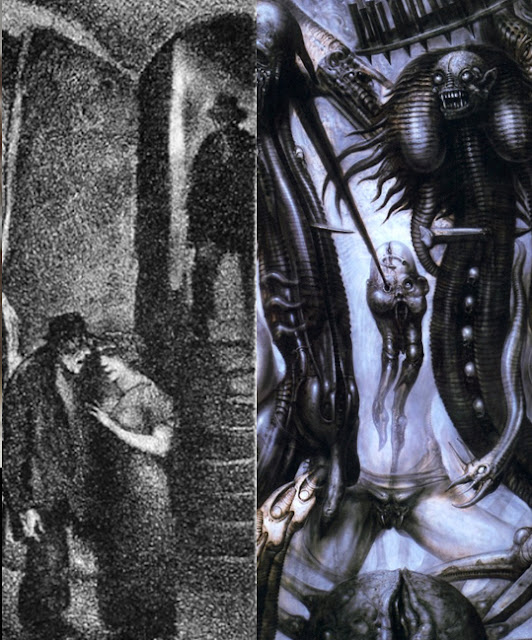