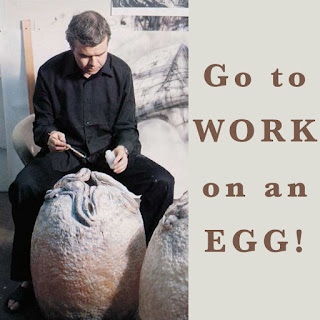 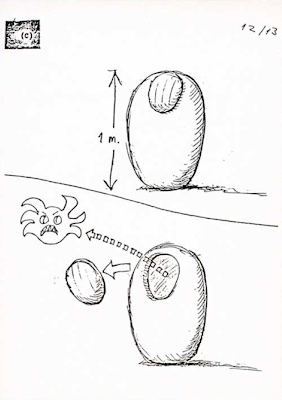 a) Initial Egg Design
For Dan O'Bannon, H R Giger painted the egg design for the painting Alien I which showed the cross section of the (2ft 6 inches) spore.

A hollow plaster egg is made for Giger in the plasters shop from his mould and this would be used as a modelling base for the opening and the construction.

Later, in Zurich, he changed this picture to give the egg a more organic look.
b) Roger Dicken contributes an egg idea
After Dicken read the part of the script that described the Egg Chamber, he made a little plasticine egg that was about three inches tall, with an orifice at the top and sort-of-roots at the bottom.
He took it in and gave it to them as a suggestion.
He was sure that Giger must have liked it because he drew up what seemed to be it and then they used his drawings as the blue-prints for the full-sized models.

The spores would be fondly referred to as "Organic Footballs: by HR Giger

d) Inspection of the egg with the vaginal opening
Ridley Scott, Les Dilley, and Ivor Powell come to inspect Giger's work just as he started to apply texture.

The lid of the egg which in O'Bannon's sketch sprang open like a jack in a box, Giger transformed into an organic vagina like opening.

When he takes the plastic sheets in which his work is draped, there is a howl of laughter from the whole group.

He had lovingly endowed the egg with an inner and outer vulva us made from clay covered in sausage skins layer around the pink aperture.
e) The Boardroom Meeting
In a meeting in the boardroom upstairs at Bray Studios, Nicky Allder recalled that after Ridley had seen the egg, someone said "What do you think of the egg?"

Gordon Carroll said "Ridley, what do you mean by "the egg looks obscene"?"


Ridley responded "well, it looks like some great fanny" ("fanny" is an English term for "vagina")

There was another hush in the room before Gordon Carroll said in a voice that sounded like perfect Queen's English "Ridley, you have an alien running around with a three foot penis on his head, the alien spaceship has got three fifteen foot tall vaginas that the space people are walking through and you call the egg obscene!?"

f) Giger's Solution
Giger is then told that Ridley thinks that it is too good and Gordon Carroll admits that it is too specific, he is afraid  that it will get them into trouble especially in the catholic countries.

Les Dilley has an idea about having something more like a flower opening and so H R Giger takes this and decided to double the bud effect, laying the two slits across each other that seen from to Giger, from above,  the opening would have the shape of a starfish and also this would form a cross that the Catholic people are known to be fond of looking at.
Giger told them ‘Well, if it’s a cross, then it’s religious, and people don’t worry about that."
He was able to satisfy himself, the producers and the public at home and abroad all at once.
Roger Christian would compare it to a hot cross bun, which is something that the British ate during easter
g) Giger's cutaway of the Alien egg with face hugger inside references vase from "Asterix and the Roman Agent", (Originally published: 4 June 1970). written by Author René Goscinny, illustrated by Albert Uderzo 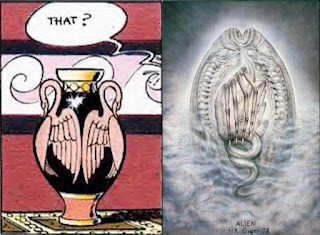 h) See also: Giger's alien spore, a homage to Lovecraft's The Old Ones ?