a) Alien unfolding
In the comic book version of the original Alien movie illustrated by Goodwin and Simonson, there is a scene where the Alien has squashed itself into something that looks like in the illustration of a stuffed back pack lying on the ground and it suddenly unfolds. Walter Simonson was flown from America to England to see a roughcut and about two or three weeks before Christmas where, and he saw this particular as he described it, Ripley is running around the spaceship and comes to a dead stop, and there ten feet down the corridor there is a box in the middle of the floor, and it obviously wasn't supposed to be there, the viewer doesn't recognise the shape, the silhouette means nothing. it obviously wasn't clear what it was, but the colouring and the metallic lustre leads one to realise that it is the alien creature.


There is this moment's pause and the box begins to shrug and move before it begins to unfold itself and that great spectacular alien head comes up and it’s the alien all folded up into this kind of organic box, and it’s between her and the life boat and this thing is there revealing itself to be the alien waiting there for her in the hallway, the lifeboat access is down the corridor beyond the creature and so both Ripley and the audience realize just exactly what they're looking at. She leaps back and drops the cat, and she goes back around the corner. There's a moments pause and then about seven feet off the ground, the alien's head slides around the corner. Walter liked the scene very much but someone that he talked to from the audience, either Michael Gross or Paul Scanlon who were there thought that it looked very cheesy.

b) Foreshadowing
However for Walter as a storyteller, what that did for the story, it foreshadowed what the alien did later when Ripley got into the lifeboat and she isn't at all aware that the alien was there. He thought it was wonderful that they would do something in the story where you begin to understand that the alien can fold up in ways that doesn't look like itself and it moves the alien a few feet further away from just being a man in a rubber suit.

c) To put in or not to put in
When it came to including it in the comic book, there seemed to be some concern about whether that scene would be in or not, Walter Simonson phoned up Charlie Lippincott the Public Relations man for 20th Century Fox and said to him " Ok, I’m at the point where I have to draw that scene or not draw that scene, I need to know, is the scene in or out? Because if it's out, that gives me one extra page for the remaining eight or nine pages of the book. so what do I do? " It was important to know because putting it in or not would effect the left and right sides of the pages of the story.

Charlie Lippincot said "Well, Right now, it's in"
Walter replied "okay" and added it back in, but when the movie came out, the scene was no longer in the film

In November 1979, Ross the reporter on the Hollywood scene for Famous Monsters made a report about what Dan O'Bannon said at a preview about the scenes cut from Alien and then proceeded to mention that there was a scene of the alien "folded like a weird-looking box", but this along with various closeups would give us too graphic a look at the creature.

Walter Simonson started talking about the scene regarding the Alien in the box shape.

In 1998 Walter in a post to a newsgroup suddenly referred to the shape as "an organic box-like thing" or as well and would continue to refer to it as a box in interviews relating to Alien the Illustrated Story.

g) Watching the scene in the rough cut

Given that there is no one telling able to tell us how the effect was done, since Walter Simonson was a witness to the scene in the rough cut, although he didn't actually know how the effect was done, he was able to say that he didn't think that he was seeing some inflatable suit, and given how some people can fold themselves up in remarkable ways, he leant towards the idea that either somebody was unfolding himself from within the box or perhaps it was a mix of a person inside and animatronic operation. 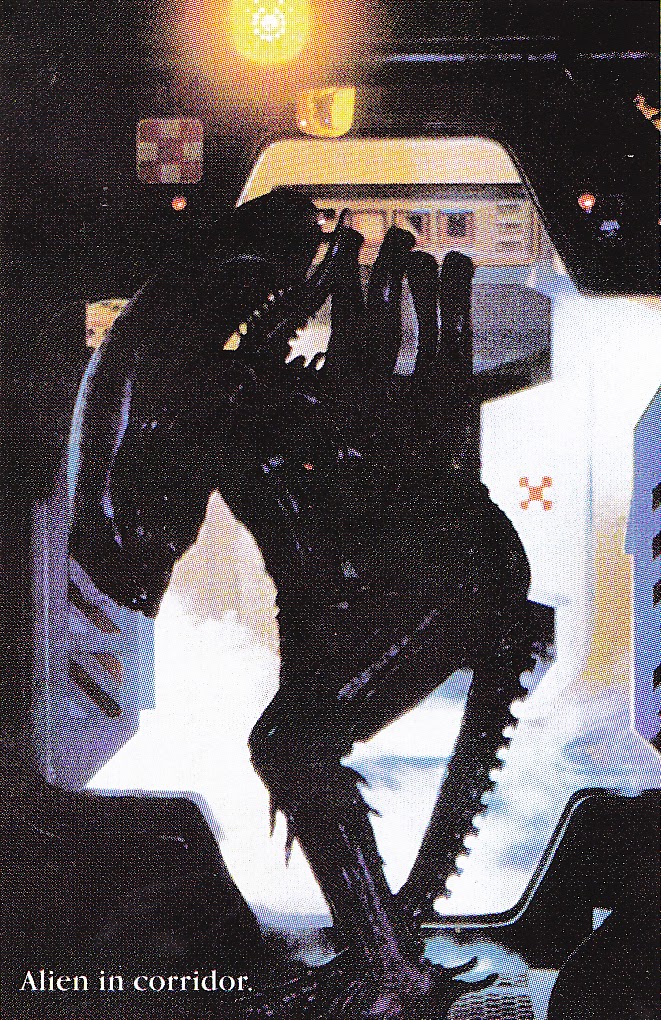 h) Unfolding like a bird out of the egg

Cinefex writer  Don Shay talked about how Ridley wanted to have the creature curled up, in total defiance of gravity, about ten or twelve feet up the side of the landing leg. And as Brett entered the landing leg chamber looking for Jones the cat, the beast would slowly unwind and swoop down, snatching him and disappearing with him up the shaft, however they did not achieve the shot of the alien curling up here and whether it was supposed to curl up to the extent of the image in the Aliens The Illustrated Story is another question.

But it was mentioned that Ridley Scott wanted the alien creature to be able to roll up into a little ball but the first costume was so cumbersome that the actor couldn't do a great deal of movement in it and so the costume had to be divided into a dozen different parts. However still, when he attempted to have Bolaji Badejo and then the stuntman attempt to roll up into a ball and then stretch out while suspended about a dozen feet in the air held by a harness around the stomach area, as if it were unfolding like as Ridley imagined "a bird out of the egg", and this idea sounds interesting in relation to our organic box like thing

When Bolaji however attempted to perform the scene, he curling up as if he was a cocoon of his own and slowly coming out and stretch out, but he couldn't do it. He was held by a harness around his stomach and was suffocating making those movements. Scott tried to do it with a stunt man, but failed to make it work. Ridley's view was that they would have needed more time to work such a thing out to have it in an action scene and Brian Johnson understood that the suit needed more modification.

i) Ivor Powell's point of view

Ivor Powell when asked about this scene in 2014 absolutely had no idea about it, but wondered because of the fact the alien had crushed itself into a box if it had some sort of connection with the cat box, jokingly stating that perhaps it was trying to mate with the cat. He understood that the alien was supposed to compact right down, and when they cast the alien, they had in mind that the alien creature changed shape continuously, as if it were a metamorphosis.
(see also Looking for the Alien's nucleus)

j) Mike Matessino who worked on the Alien laserdisc content

Mike Matessino worked on the bonus content for the Alien laserdisc which was released in 1999 was certain that he saw the material involving the alien fully crouched as a silhouette. He saw that in the work print, the Alien is crouched in the hallway when Ripley peeks around the corner after setting the self destruct.

The footage was in the 127 minute black and white work print that was given to Jerry Goldsmith to write the score and the cut fit the music as he composed it. The music editor's spotting notes also confirm the footage was there and that the cue Jerry wrote was called "Sleepy Alien". You can hear that the opening part of the cue on the album is longer that what was used in the movie.

As Mike recalled, there were two peaks at the creature, first it is seen fully crouched and the viewer doesn't see it rise and Ripley was peeking around the corner seeing it crouched and then ducks out of sight, and then she peaks at it again when it would be seen rising until it senses her and turns around.

Those few shots were cut and they went for more of a shock, which did work more effectively especially with the strobing lights combined with Jerry's score. What was left in the final edit was a combination of elements from the two "peeks".

The question remained about whether in terms of footage, Mike Matessino saw everything that Walter Simonson saw until April 2015, footage surfaced on Youtube (https://www.youtube.com/watch?v=WsU6yaA0r0w) showing the Alien in a crouching position and this was still not the footage of what Walter was talking about. So the search continues.

k) Was there ever a box scene?

As the years have gone by, the idea that this scene was ever filmed has been called into question since no one can find any solid evidence of the actual shot. Walter Simonson's experience is called to question despite what he remembered seeing and what he went through in the decision making process about adding the scene to the the comic book. The value of the article where Dan O'Bannon has been interviewed and then indirectly quoted in Famous Monsters of Film Land has been looked down upon. So this thing has been labeled as " folded like a weird-looking box" and "organic box like thing" although not literally as a box.

Charles De Lauzirika who put together the Alien Anthology Bu-Ray Set, took the comparison to a box literally and could find nothing of that and noted that the illustration in the comic book was actually not really like a box. However what he was discovering was that there were people who were fans reading the comic book and online were discussing that they remembered the scene as really being in the film.

However De Lauzirika could find nothing in the storage boxes or in the photo archives showing the alien folded up that was known as the organic box like this, and thought that perhaps it was imagined by the comic book illustrator although Charles would like nothing more than to find the footage.

At the present, it's a question of looking for more evidence that the scene existed and working out what the scene was rather than imagining all kinds of strange things that are a product of the the imagination of the minds of the people who are inspired by the idea that it was necessarily box shaped or that it had to be strictly like the scene as illustrated in the comic book without artistic reinterpretation. But the scene as described by Walter Simonson and the way it inspired him remains the enigma.

However Richard S Meyers in his book "From Rollerball to Return of the Jedi: THE GREAT SCIENCE FICTION FILMS ” (1984) described the scene in terms of it being something that was cut, but only went as far as to claim that in the scene, Ripley comes across the hunched alien in the passageway and then the creature then unfolded itself majestically, giving the audience a first full look at the complete thing, and of course the scene jettisoned along with the cocooning scene for pacing sake, and this appears to match up with the existing footage found so far not suggesting anything about the alien as an organic box like thing.

n) And also a variation of the idea was used by Ridley Scott in Prometheus. See: Prometheus: Fifield found rolled up