Alien: Giger's Paintings that lead to the big Alien

It could be said to be a combination of a motorcycle, a motorcyclist and a sea creature.

Various other elements of the painting can be found that make it certain that Giger took inspiration from Ancient Egyptian images, notably the Eye of Horus and images of The Mummification ritual.  (See H.R. Giger and the Egyptian Mysteries)

ii) The idea of the biomechanoid
Giger talked about the idea of his biomechanoids in the documentary "Alien Evolution", possibly in relation to the Necronom paintings themselves since Necronom IV was being shown at the time.

It seems that he stated that he wanted to make something that would be somehow human but that would also be robot-like, a kind of human that is protected from all kinds of external forces, be they weapons, radiation, or whatever else.

Instead of having their bones on the inside, they have them , partly at least, on the outside like an exo-skeleton, so the idea was also brought forth in another version of the translation that they were indeed protected by a suit of bone.

He mixed the ideas together, his world of bones along with technical structures, and that's how the biomechanoids came about from the interplay between the ideas of biological and the mechanical.

Since there is such a difference between two of the translations, this documentary by Mark Kermode doesn't give one real hope for a real accuracy in what Giger said but expects the viewer to be content with a generalisation that may deviate to a great degree with what Giger is putting across in his own words.

b)   Necronom V
b.i) Describing the painting
"Necronom V" shows a figure with an elongated head riding on pipe like structure as if it were a bike, and it ends with humanoid heads.
a strange other figure is planted into the riders back and pierces it's ribcage with a pair of horn like structures which might also be perceived as the riders breasts making it a female.

The Alien's head and especially the face can be compared very much to the head and face of the central riding figure. So this painting along with Necronom IV are talked about by Giger as being the two paintings that really inspired the form of the final creature.

b.ii) See also The Origins of Necronom V
c) Necronom II
c.i) Describing the three faced form
Giger's "Necronom II" shows three sides of a demonic face with an obvious phallic tongue jutting out and the eyes are covered over by a dome stretching over the upper skulls of all three faces.

From the sides, the interior of the mouth can be seen along with the tongue.

This is where the Alien creature's jaws and front facial features have been borrowed from.

The side faces with a phallic tongue jutting forth and tendons stretch across from the upper jaw to lower jaw, and the covering of the top of the head stretching down the front over the nose area.

The sides of the head of of the big Alien with the side of the mouth opened up so that you can see inside and the tongue as well.

The tendons were made from shredded condoms.

The phallic tongue has been replaced by a jaw tipped tongue showing another set of teeth inside which Ridley believed was typical of Giger's paintings . 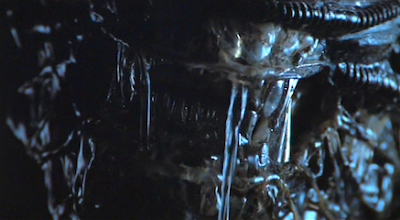 c.ii) The Alien beast's translucent mouth
The final movie alien's has a translucent mouth and metallic teeth underneath that can be seen through the translucent skin of the mouth.
The front of the final movie creature's face can be seen to have transparent skin over the mouth showing the teeth right down to the roots.
It is barely a skin that covers them with no lips as such and the covering of the top of the head stretches down over the eyes making it seem eyeless and also over the nose, but in the painting the actual nostril areas appear to be uncovered. 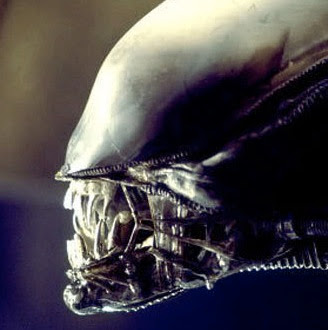