leading from
Alien : Birthing the chesburster 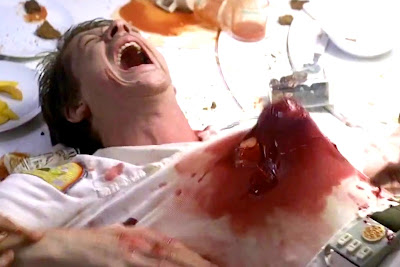 Dan admitted that he spent most of 1977 in hospital with his stomach condition still undiagnosed making decisions by phone, and felt miserable and intense pain until Gordon Carrol called up and told him "We're going to London to make Alien. Let's go!". Dan was not too happy about going but he was persuaded to go along. (See: Alien: Production Begins)

He had already spent thousands of dollars from his Alien option and preliminary money on medical bills and it looked as if he'd need more so he went along to England. So it was as if he were being forced to leave his hospital bed and go to work. Once he got to work, the process of working helped him to make a complete recovery, so it was the first time he felt better in more than a year and the doctors were baffled.

But they started coming back again towards the end of his involvement with the Alien production. After endless scans and probes, the doctors again appeared to find no cause whatsoever. The only cure was to shoot him full of Demerol and feed him intravenously. He got out of hospital a few weeks after one bout but his worst attack came during the Alien sneak previews. 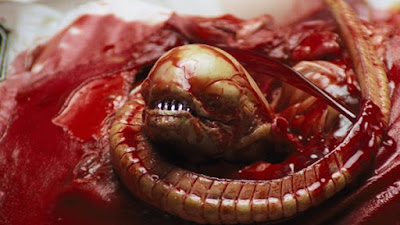 b) The Chestburster: Catharsis for pain

Instead of going out and murdering people, he wrote screenplays fueled by his anger, and the angrier he got, the better he wrote.

When he lay on Ron's couch after Dune's collapse,  and didn't have two dimes to rub together, his stomach problems were flaring up again and so he embodied all this physical and mental paint in the Alien monster.

Giger was told about about how when Dan was writing the script, he had a stomach pain and he wanted the pain to go away but came up with the idea of the pain leaving through the stomach, so he invented that, but Chris Foss knew about the time that once Dan ate some fast food, after sleeping  he awoke with an incredible pain and his symptoms made him feel as if that there was a beast inside him.

Writer Jason Zinoman was able to reveal how that the simple act of eating terrified Dan, and a trip to the bathroom meant potentially hours. of arduous and humiliating pain. The digestion process felt like something bubbling from inside of him struggling to get out. This made O'Bannon very nervous about travel or even being far away from a bathroom.  Stress made it worse. He thought about his stomach all the time. He kept his disease quiet and worried privately to friends that it would ruin his career.

A curious thought was that this this problem with his digestion process felt like something bubbling inside him struggling to get out, imagining a way for the pain to leave and that it was a beast. From these ideas coupled with thoughts about what he had seen in comic books etc came the chest burster.

Over the years discussion about his stomach condition had taken place, which would remain undiagnosed until 1980, Michael Froog recalled that Dan mentioned that he was thought to be inflammatory bowel syndrome at first, he had an attack of what appeared to be appendicitis during the making of Dark Star and so that was removed by surgery, but he was finally diagnosed with Crohns disease, it was wondered if that appendicitis attack due to that disease as well.

In 1986  he acknowledged to Face magazine that he had a problem that affected his intestines and he would be having a large section of bowels required removed. He inherited a condition, at one time he mentioned that it came from his father  (although his UCS lecturer Michael Froog remembered Dan saying that it was from his mother,) it effected his digestive areas but wasn't infectious.

He wouldn't talk about it in detail with the media, he remained guarded about the nature of the actual problem throughout the rest of his life. However , once he died on the 17th December in 2009, it was revealed that he suffered from the disease.

As it happens that the experiences that he had with his digestive area problems, directly or indirectly related to Crohn's disease that would eventually kill him, became the inspiration for the chest burster, something that would make his name go down in history.