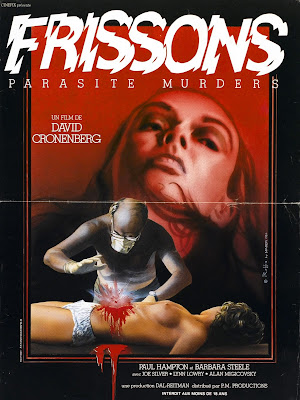 a) Questioning Dan O'Bannon's inspiration
David Cronenberg made the film Shivers in which there appeared a parasitic creature that lived in the body, it would leap onto the victims face and enter through the mouth to infect the host and be seen bulging through the skin, his view that it wormed its way out with corrosive fluids.

For Cronenberg that was enough to suggest something of the Facehugger's method of impregnation and how the chestburster gets out in Alien.

Also what is seen at the beginning of the movie is a man is seen cutting open the body of a young woman to get at the parasite within and kill it with acid.

The setting of the film was the Starliner Towers hi-rise complex that perhaps was begging to be reimagined aboard a space ship.

Of course he didn't actually know Dan O'Bannon or anything about his personal body horrors that Dan seemed to have been relating through the idea of the chestburster .

However Dan had admitted to being inspired by Philip José Farmer's "Strange Relations" published in 1960 which contained in its closing lines the idea of what the facehugger does to its victim and by Tim Boxell's comic book story Defiled which came out in 1972 that had featured a man raped by an alien creature using sexual organs incompatible with the human form leading to a creature that grows inside and soon comes out of the chest.

Whether Shivers remains another guiding vision for Dan O'Bannon's Alien remains a question.


b) Incident in Germany
At a film festival in German when they had shown several of his early films, someone from that country in the audience stood up and said "How dare you show this film! You have so obviously stolen from the movie Alien! There is parasite that comes out of the mouth and there is acid that burns a face,  just like Alien!"

Cronenberg replied "You know, but this movie was made three years before Alien,"

The German man said "What?"

The German man responded "Ah, now we know who the thief is"


c) Cronenberg's Inquiries
Cronenberg realised that over time he was having a strange sort of a non-relationship with Dan O'Bannon because he never met him and he knew a lot of people who knew him and worked with him.

For instance he knew John Landis and he told Cronenberg that Dan knew very well what he called the "Canadian films" by which he meant Shivers and Rabid, when he wrote Alien.

In Cronenberg's mind that meant that he must have stolen all the parasite stuff from Shivers and he would have been familiar with Rabid as well. He found himself talking to Ron Shusett because he had been given Dan and Ron's Total Recall script to take a look at and Ron Shusett told him, "He never saw those movies, knows nothing about them and I believe him."

And so Dan O'Bannon would later deny that he has even seen those movies while John Landis would swear that Dan talked about about them all the time and knew them very well.

It was down to the one who could get the idea past the starting gate first and Dan O'Bannon had found that many of his projects had evaporated because others had had the power to realise the same idea first.

However David Cronenberg had seen enough similarities between films that he was making and suddenly the idea would come out in another form , maybe in a capsule summery of another movie or a review of the movie, no matter how obscure or personal you idea might be, it might suddenly share ideas with another movie that would take away it's impact.

In a Jungian sense once can see this as synchronicity.

When Cronenberg made The Brood, he found out that the film Manitou shared something similar when he read about a birth of a weird creature coming out of a woman's back and then when he made Scanner, he found out about Altered States that shared some things that were similar.

The film dealt with the merging of human consciousness and machinery such as the guns and video  and one of the stars of that film was Debbie Harry who had been in a music video directed by H R Giger earlier that year, and she was the one who pointed out the coincidence there.

Cronenberg's film Shivers was released on October 10, 1975, and then just over a month later on
13th November 1975, Ballard's novel High-Rise was released strangely dealing with many of the same themes.

Perhaps because Cronenberg would go on later to make the film Crash based on Ballard's novel by the same name.

However, while Cronenberg knew of Ballard as a science fiction author, his attention had only been first drawn to him after he made Scanners, and a critic sent him a copy of the book Crash, which he never read.

The madness in Ballard's High-Rise would remain unexplained, while for Cronenberg, the madness would exist because of these slug like creatures.

What that should say about Alien though is another thing, should the madness be the alien or should it be Weyland-Yutani's who sent the ship along and a robot who would break rules to let it in?

Ben Wheatley the film maker could only marvel in disbelief at the synchronicity when he appeared before an audience at a Brighton showing of his movie High-Rise, almost quite sure that Cronenberg had been copying Ballard even though he knew that Ballard's book came out afterwards.

As far as he was concerned, there was some sort of crossover, or that one of them was aware of the other. people were saying that they came out at the same time, but Shivers was so very close to High Rise in so many ways,

The interviewer Graham Duff would tell him that the idea that Cronenberg would have found all he needed to read in Ballard's other writings before hand, while interviewer Jamie Sherry would inform him that they were produced in isolation of each other, seeing it as something like 'convergent evolution' with two species developing in similar ways despite being independent of each other.

But with the amount of time it took for Cronenberg to develop and make the film, it suggested that the idea for the film hatched before 1975 and Ballard had been working on his novel for some time as well

f) Attempts to find the  Cronenberg's Shivers/ J G Ballard's High-Rise link
However despite the emotions invested in the whole fiasco about Dan O'Bannon borrowing from Alien for the Shivers, Cronenberg talked about the time that he went to see Alien himself, he was disappointed in the film because he didn't see any metaphysics or philosophy in the way that he would want to in a film of his own.

For him it was a creature that turns out to be a man dressed in a crocodile suit who chases people around a room.

He saw no metaphor behind the way Alien's parasite was used, it didn't evoke anything for him.

He saw only that when John Hurt had the parasite within him, he was going abut his business as usual.

But in Shivers, the parasite stays inside the people and changes their behaviour and their motives, which uses the thing for more than simple shock value.

Meanwhile JG Ballard historian David Pringle was able to say that there was a Ballard story called "The Man on the 99th Floor" (1962), about a guy who tries to reach the 100th floor of a high-rise building.

But it was exceedingly minor, and the chances of Cronenberg having read it and been influenced by it are slim. The World Trade Center in New York City was opened in 1973.

There were lots of other high-rise buildings going up around the world at that time -- so stories set in high-rises were kind of in the air. Two novel-length thrillers about such buildings were The Tower (1973) by Richard Martin Stern and The Glass Inferno (1974) by Thomas N. Scortia and Frank M. Robinson.

The rights to both books were bought by Irwin Allen, and they were combined to make the movie The Towering Inferno, first released at the end of 1974.