Leading from:
Early Development of the Alien Script 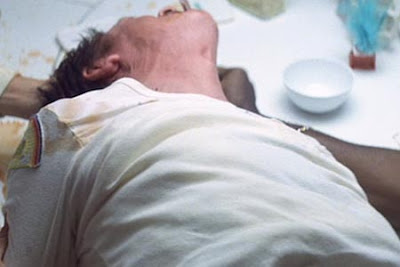 a) Face-rape
Ron Shusett had the idea of a man face-raped by an alien organism later giving birth to an alien baby, and then Dan mulled over the whole idea, he wondered about how the baby alien creature would come out, he had thoughts about them coming out from various orifices and so on and soon himself woke up in the middle of the night with a realisation of how it should be.

He got up off the couch and went to Ron's bedroom and told him his idea.

He said to Ron, "The monster bursts out of his stomach" and he went on to explain that the alien not only lays its egg inside the man, but grows inside and emerges as a baby, splattering flesh and blood everywhere.

b) Reflecting Crohn's disease
The way he had it was having the creature burst out of the victim's stomach rather than actually the chest,  seemed to reflect very much the stomach and bowel problems he suffered from that would eventually be diagnosed as Crohns disease which would eventually kill him in 2009. (See: Medical-inspiration)

c) Other inspirations
The actual idea though for a creature that burst out of a victim's body had been germinating in him for some time.

The initial concept came to him when he saw the "Seeds of Jupiter" story from issue No.8 of the comic book Weird Science originally published in 1951 and then Tim Boxell's comic book story "Defiled" from Death Rattle #1 (1972) which certainly help to shape the idea,  and there would be experiences that he had with his own intestinal issues (See Medical Inspiration) that he was dealing with that made the idea of a what would be known as the Chestburster even more of a personal experience

d) Bringing it together
Dan was now so sure that they had cracked it and had got what they needed to write the whole movie, since no one had ever seen anything like that on the screen and in three weeks they were able to write their whole story.

Although Dan had talked briefly in the past about how the alien chestburster came from his experience with stomach problems, the details about how he arrived at the idea came to the surface after soon he died.

In one version of the early script (seen in Alexandre O Philippe's Memory: The Origins of Alien documentary (2019)) we see the words "But when they go to get him, they find infirmary door hanging open. The Autodoc is smashed, and Broussard is dead - a huge hole ripped out of the middle of his chest, blood all over the room. They realise that something was growing inside him, and now it's escaped"

In Paris, Dan O'Bannon would have been introduced to Hergé's Tintin. Hergé's work was at the time at the core of the Bande Desinée culture that O'Bannon was becoming initiated into during his work on Dune by the likes of Alexandro Jodorowsky and Moebius who were both fans. That is not to say that Dan should have been much a fan as some, but he should have understood why it made sense to take serious note of it.

In Nouveau Tintin N° 18, published 13th January 1976, another episode of The Adventures of Tintin and The Picaros that appeared relevant to the Alien script was published.

After visiting a Mayan step pyramid, and being forced off the road Tintin, Captain Haddock and Professor Calculus encounter the drunken Arumbaya tribe who invite them for a feast. The adventurers find that the food is not to their liking because Professor Calculus has put something in the food that would make alcohol unpalatable The characters find the food too spicy and they are disgusted by the wine that they're drinking, because Professor Calculus had put a special pill in the food to make alcohol undrinkable. This linked up with the scene in the Alien script where they discuss their disgust with the food.

Then the following week in Nouveau Tintin N° 19 another relevant episode. Here Captain Haddock , after walking off and finding himself stepping into a lake where a crocodile fights with a snake, he finds that he's suddenly shocked by something, and out comes the electric eel that's been inside Captain Haddock's jersey. Professor Calculus points out that these things can grow up to a couple of metres long and stun a horse with a single discharge.
It's as if he saw these two episodes and how they could connect with his story, leaving a pyramid, the events at the meal with the tribes resulting in discussion about the disgust of the food, and finally one of the people suddenly has an extreme reaction to the wine because of a special pill that makes alcohol taste disgusting, and his utterances spelt out in letters look similar to Broussard's painful groan in Alien, as he is about to chest burst.

Captain Haddock wandering around in near somnambulistic state having been hit on the head with a bottle a caught up with the crocodile's fight with the snake might reflect one of O'Bannon's Crohn's disease attacks as if that was happening inside his intestines if he had read that episode and thought "that's what I feel like sometimes inside" and then saw the following panels, "look at this little guy popping out, wow!", and so the electric eel that could grow to two metres and stun a horse with a single discharge which was interesting because he wanted his alien to grow to a roughly man sized creature. That would help to tie up some ideas that he had

One would say that this isn't what inspired the chest burster, but what helped the impression form for the purpose of the script, and perhaps put it in a meal scene.

Why should Dan have this material in his hand? Perhaps either he saw it before it was published in the magazine while he was in Paris and remembered it or someone such as Moebius was sending him cuttings.

Dan wanted to show the event taking place, and forming an idea, he told Ron, "I'm going to have it happen at dinner. while they're all sitting around, it's going to land right in the middle of their food!"