a) Dan O'Bannon's original Alien script reflected an interest in ideas to do with Erich Von Daniken's Chariot of the Gods idea with pyramids on distant planets and long dead aliens in space ships.

Meanwhile his alien monster would be loosely associated with the alien demons described in the fictional Necronomicon tome of the HP Lovecraft stories. One might wonder if the book existed in some way as a factual thing with and the actual alien demons could be summoned, different versions of the book had been published but non quite like the one described in Lovecraft's stories. O'Bannon decided he had to create the most realistic one himself.

And then Ridley Scott would decide to think of the garage with landing leg as a temple along with the Space Jockey chamber and they would be linked as idea by the same piece of music. Giger's involvement in the film with his designs led to inclusion of imagery found in the Ancient Egyptian book of the dead with the design of his ancient space pilot corpse in a derelict space craft loosely becoming a Sokar Funerary Barque

One might want to go on to think of the way that model makers and set decorators were eager to start detailing the set with references to Madame Blavatsky's secret doctrines, and biblical references by the visual display units that would confuse the likes of Yaphet Kotto to no end.

Were the studios used to film Alien performing the role of a temple of mysteries?

d) See: Biblical references to Japheth around the Nostromo monitors

h) See: Summoner of the Demon

j) See: Alien In The Brain 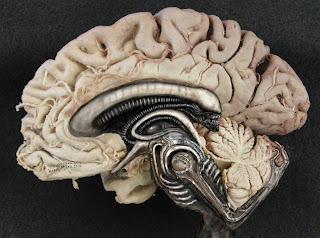