Alien: One Nostromo shuttle or two? 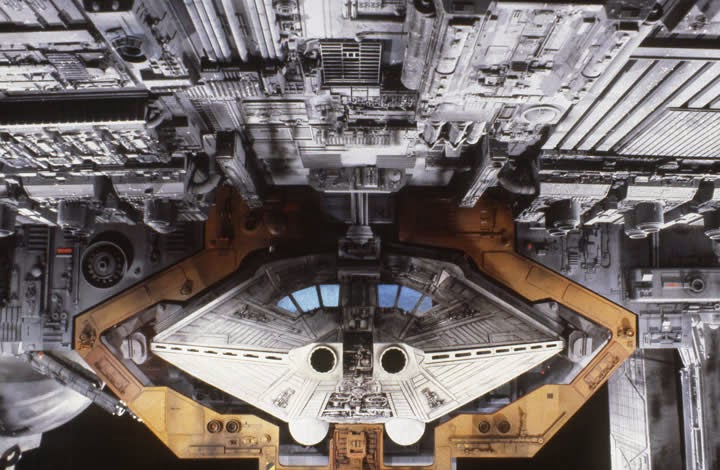 a) One shuttle inoperable?
There was a queery about whether the Nostromo should really have had one or two shuttles. Bill Pearson understood that originally there was an escape vehicle one either side under the "stubby" wings on the tug which connected the engines to the main body. It was always intended that an Escape Unit would be present under both "wings", but also he thought that there was a reference in the film to the idea that the other shuttle was under repair and out of service, and so only one was left to use, on the other hand, Phil Rae who remembered that this matter was discussed on the model unit but he recalled in the movie that Ripley said "The Shuttle" implying that there was only one. However on top of the shuttle it said E1 and that might indicate that there was an E2.

b) Symmetrical?
Jon Sorensen also agreed with the idea that there were two shuttlecrafts, the Narcissus was symmetrical so one would be under each "wing". They never got around to putting shuttles underneath the Nostromo models and so it only turned up in a section design to show the shuttle being launched.  But indeed it was curious that there should be one space shuttle with only two cryotubes, Jon didn't know why in the film it should only have one, but put it down obviously to a shortcut to tension as one might expect in a horror movie.

c) One shuttle?
However Dennis Lowe only understood that there was one shuttle, the Narcissus, but wasn't sure what the others had to say and felt that Martin Bower who made the Narcissus model might have been the one to give a definitive answer.

d) Asymmetrical?
Simon Deering had the view that perhaps the Nostromo wasn't ever completely symmetrical anyway so why should there be two? He thought also about how the Titanic didn't have enough lifeboats for all the passengers and crew.