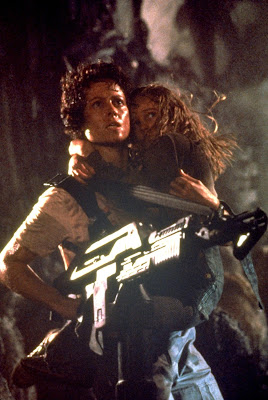 a) Entertaining possibilities with Sigourney
The producers of Alien, David Giler, Gordon Carroll and Walter Hill were friends with Sigourney since Alien and they would from time to time get together over dinner and laugh about a possible Alien sequel, coming up with strange ideas about what would become of Ripley, such as opening up the Narcissus and suddenly she would dissolve into dust and they would get someone else to star in the movie instead.

b) The Studio's first attack
However, despite the fact that Cameron had been asked to write a story based on Ripley, later it turned out that everybody else thought that it could be made without Sigourney Weaver.

Cameron found this mind blowing and completely out of the question for his story.

They were starting with Ripley from the end of the last film and it was her story.

Fortunately they were able to overcome these obstacles in the minds of the other people involved, but they would have to fight very hard for Sigourney to be in the picture, which virtually drove Cameron crazy.

c) Gaining Sigourney's interest
Sigourney had no real interest in returning for a second Alien movie, she was quite sure that it couldn't be done.

However she was at the time filming Half Moon Street and they were running behind schedule.

d) Presenting Sigourney with the story
Jim Cameron presented her with a story about how she comes back with the expansion to her character's background, she's lost in space, her family is gone and no one believes her story, and so in a sense she is an outcast in the society and it's the isolation of that and her memories, and this is what drives her back to the aliens.

Rather than being heroic or unselfish, she returns because she needs something to keep her busy, and then when she comes by the little girl Newt on the planet, she regains her desire to really live and so is reignited, becoming like the old Ripley, very practical and methodical.

e) Gun control
Sigourney liked the Aliens script, it put her fears at rest, perhaps because she was so busy at the time she might have skipped all the stage directions which went on and on and on about guns, she didn't realise that they would be the star of the film until she got there, and then they brought out this amazing hardware.

Personally she detested guns and was a member of a gun control lobby called Handgun Control, and she was amazed about the warlike aspect of this picture, which she was never comfortable with. She thought that it would be much more interesting to outwit the Alien rather than have to shoot it.

f) Ignorance of emphasis of guns
She also perhaps didn't really take into account the scripts emphasis on guns because she read in the script references to such things as Pulse-guns and Smart-Guns and she had no real idea what these were assuming that one short a pulse and the other was smarter than the average gun, and then she came to realise that these were traditional guns in new designs

Sigourney said to Jim, "I don't want to shoot a gun."

He responded "No you have to shoot a gun."

Her response was "Oh. Well, can  I get killed?"

Then he added "No, no, you hate the Aliens, you've got to machine gun the shit out of them! Because that's what the film is!"

Sigourney was having these very specific ideas and she tried to influence the Aliens production with them but it didn't work.

So Jim took Sigourney onto the Pinewood backlot, and he gave her a Thompson machine gun and let her loose with it.

Her response was "Oh, what fun."