Perhaps not strictly related to the Henu Barque but it grabs me as an idea that I wish was true. In the movie, it's the character Vaughan's tattoo in the shape of a steering wheel and perhaps bodily organs, but it loosely echoes the idea that I have been following.

b) If we are to make a comparison, the three rudders become the three pins on the steering wheel column, but that doesn't really prove anything, but aligns with the oddity of the interest in the Henu Barque. 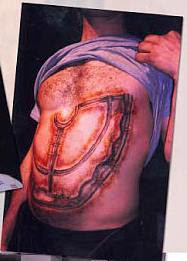 Final tattoo makeup for the film 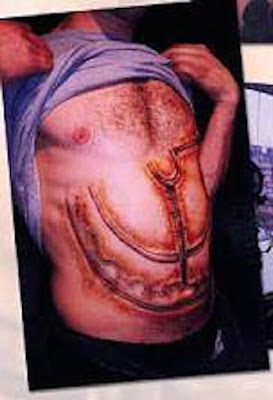 Final tattoo makeup for the film

James enters to discover Vaughan getting a wound tattoo on his abdomen, one that looks as though it could have been made by the fluted lower edge of a plastic steering wheel. The woman giving Vaughan the tattoo is sexless and professional. She could be a nurse or a hospital dietician.

James sits next to them, barely acknowledged by the woman. Vaughan has messy papers spread out in front of him which include stylized sketches of famous crash wounds, photos of Andy Warhol's scars, automotive styling detail drawings from a 50s era Detroit design studio.

VAUGHAN
(to Tattooist)
You're making it too clean.

TATTOOIST
Medical tattoos are supposed to be clean.

VAUGHAN
This isn't a medical tattoo. This is a
prophetic tattoo. Prophesy is dirty and
ragged. Make it dirty and ragged.

TATTOOIST
(a hint of sarcasm)
Prophetic? Is this personal prophesy or
global prophesy?

VAUGHAN
There's no difference. James - I want you
to let her give you this one.

JAMES
Where do you think that one should go?

Vaughan spreads his legs in a mechanical, unsexual way and grabs the right inner thigh of his greasy jeans.

VAUGHAN
It should go here.