a) Giger's interests and confusion
H R Giger  was contacted to work on the script.

Vincent Ward came to see him in Zurich and shared his ideas with Giger about a wooden planet inhabited by medieval monks who manufactured glass.

Ward showed him a small drawing and explained to him on the basis of this drawing what he wanted the planet to look like and stated that the whole planet would be made of wood.

This made a big impression on Giger but he asked "How do you see that, a planet made of wood?"

Ward's replied "Wood below and wood above, and just wood" or maybe as Giger remembered "wood and glass"

b) Giger's confusion
Giger's next thought because of the subject of wood was "flammable" and he could see a huge fire disaster at the end of the film.

Beside the oddity of this planet being made from wood, he thought the ideas that Ward had were good and very different.

The whole thing was probably like a huge spaceship made from wood, and a planet doesn't really have a below or an above.

That was what Giger understood from the conversation and flummoxed, in his mind the questions floated around, "well, how does that work, if you've got some kind of structure that floats around in space, it would have to have gravity of course so that the people wouldn't fall off or something, and of course in space, I don't know how that works in space. Could you walk around it? I don't know whether you could walk around the surface, and whether you could stand on your head some of the time and so on, without falling into space or something like that."

It seemed that somewhere along the lines, Ward had the idea that this was a spaceship clad in wood rather than simply made from wood itself, and this might have help his own arguments about the nature of the vessel but no one understood at the time 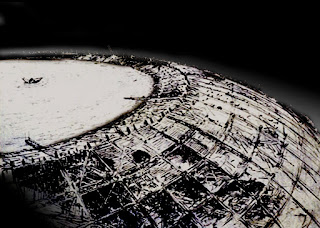 c) Giger designs chestburster oral extraction device
However, one particular scene that Giger liked was when the alien could be seen to come out of Ripley's mouth before being sucked into the mouth of John the monk who then sacrifices himself, walking into the wheat fields which are on fire.

Giger even went ahead and designed a device for extracting the creature, despite the fact that it went against Ward's idea about how it would be extracted,

d) Vincent Ward lets go of Giger
However, Giger soon found out that Vincent Ward didn't like him, perhaps this was due to the fact that he found it hard to understand Ward's ideas.

He could not understand what a wooden planetoid was doing in space, nor how it would work, but still enjoyed the fact that it was a different idea.