David Giler had read the award winning novel Neuromancer while he was holidaying in Thailand.
1988

During this year ADI are formed when Tom Woodruff and Alex Gillis are presented with the task of doing the creature effects for Alien 3.  See: Alien 3: Gillis and Woodruff get the job

William Gibson finishes his second draft of a script in January 1988.

John Fasano finishes the first draft of a screenplay based on the story by him and Vincent Ward
April
April 13th 1990
Sigourney Weaver gives birth to her daughter Charlotte.
July 1990

Giger creates no.45 of a side plan of the final alien beast

Giger draws sketch n.100 of the swimming facehugger  and drawing 106 of the facehugger around the Ox's mouth

Giger draws sketch no.104 of the facehugger in Ripley's ribcage

Walter Hill and David Giler hand in a draft

Scene where Golic is brought into the infirmary is filmed (https://magicmenagerie.wordpress.com/2016/10/12/my-pop-life-171-praying-for-time-george-michael/)

Ralph Brown visits Walter Hill  at his maisonette in the Halcyon Hotel in Holland park to discuss ideas abut his character Aaron (https://magicmenagerie.wordpress.com/2016/10/12/my-pop-life-171-praying-for-time-george-michael/)

Scene with Ripley's conversation with the wrecked Bishop is reshot 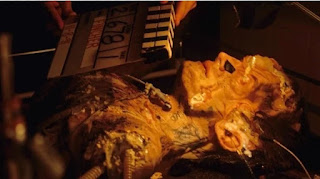 The film is released in Hollywood