Alien 3: inspiration from Element of Crime ?

a) Abundance of bald men
Alien 3 had an abundance of bald people as did Element of Crime including its director Lars Von Trier who appeared in a scene bald as a hotelier, and a main vicious character is a bald man, in Element of Crime it is a brutal police chief Kramer, and in Alien 3, it is the prison warden Andrews.
b) Child Killers
The lead character Fisher is hunting a child murderer named Grey, and in Alien 3, a percentage of the prisoners in the film are child killers


c) Autopsy of a young girl
An autopsy is performed on a young girl who died sufforcation at the hands of the killer Harry Grey in Element of Crime.
The autopsy surgeon's assistant soon falls asleep on a surface covered in surgical tools
In Alien 3, an autopsy is conducted on the body of the character Newt who is revealed to have drowned in her cryotube. Meanwhile Ripley dares not try to say what she's afraid of that might have killed the girl, claiming that her concerns were about cholera infection.
Meanwhile Clemens' assistant who is sitting on the staircase starts to yawn perhaps on the verge of falling asleep

d) Loris in a hole to juvenile alien in a hole
At the end of Element of Crime, Fisher's way out of the world is through finding a lid with a hole in the ground, perhaps a sewer line, where he finds a loris, and asks to be woken up from the hypnotic state. While it would be hard to connect the two completely, they both appear to be holes in the ground that  and both contain a surrealistic creature that brings an end to the role of the character looking inside the hole.

In Alien 3, a prison inmate Murphy shines his light on the young alien hiding in a hole in the floor of an airshaft, he looks in and the young alien spits acid in his face sending the Murphy to his doom torn to pieces by a fan blade.

e) Bishop 2's intentions falling apart like Fisher of "Element of Crime"
The lead character of Element of Crime, the character Fisher is there to hunt a child killer, but by the end of he has found himself turning into a child killer despite his best intentions.
Perhaps that was slightly like the way that in Blade Runner, Deckard intends to hunt Replicants down and then in the story, whether he was supposed to be a replicant or not, now he has become one or he has always been one all the time

Bishop 2 from Alien comes to Ripley seeming to have the best intentions, he intends to have the alien queen removed from her to be killed and then allow her to start a new life.
He claims that he himself is not an android, but the progenitor of Bishop the android.
In denying that he is an android he has perhaps become the strangest android of them all
However he wanted the alien queen specimen to learn from and surely he would have only wanted to create more aliens from it
Perhaps whoever or whatever he was, with the side of his head opened up, the big question still arises about whether he is a human or an android even if some demand that there is no question about whether he was a human or not because in the script he appears to simply be a human being mistaken for one of his androids
(See also: Haven't a clue about Bishop 2 )

f) Lars von Trier sees the Alien 3 similarities
d.vii.a) Years later Lars Von Trier himself was able to see the similarities between his Element of Crime and Alien 3, one thing to take notice of was its cinema photography and indeed this film was made near enough in his style.
d.vii.a) But a beach with an abundance of lamps that might have reminded some viewers of the lamp bulbs in the beach scenes and also there were cranes.

g) Alien Resurrection references Von Trier's work
However, when it came to making the following film in the Alien series, being Alien Resurrection (released 1997), Jean-Pierre Jeunet would openly cite Lars Von Trier as one of his influences for the movie although Jeunet's movie here would not be the movie that Lars would be comparing to his own

During the scene where Lars Von Trier plays a shaven headed hotel clerk, in the commentary for the Element of Crime DVD, Lars Von Trier mockingly claims that this person is an actor who appears in Alien as the one who comes out of John Hurt's stomach. 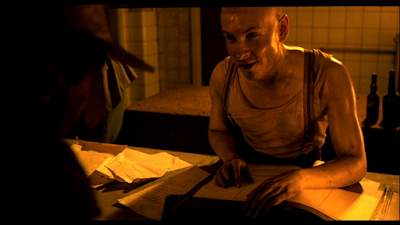