a) The idea behind the Newborn
The idea of the newborn was mimicking, much like Ripley 8 was a human whose DNA had been scattered because of Alien contamination.

The Newborn was going to be an alien whose DNA had been contaminated by human DNA, which was also the idea behind the alien queen and the alien warriors in the movie

b) Designs by Chris Halls
Chris Halls/Cunningham did some concept sketches for the Newborn which Tom Woodruff found to be beautiful.

What they knew that they wanted was a giant sized alien that had two arms and two legs, the long head and a weird body, but they decided to make it look as if it was already rotting and petrified,

There was also the idea that it was as if the thing was a dead thing that had been born and was already starting to decompose which was more or less the concept the Ridley Scott had behind the original alien while he was making the movie.

Chris did them both on the same piece of paper and at the bottom he drew a sketch that was a very human figure with a sort of sunken chest and pot belly with an alien head on it as if it was done in jest, and Tom thought it was very funny. 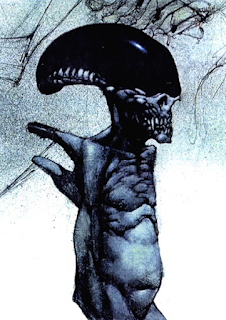 Tom said  "This looks like some old actor wearing an alien head,"

They presented Jean-Pierre with the drawings expecting him to pick the top alien but Jean-Pierre then  saw the little alien drawing at the bottom and said "I love this, this is the Newborn"

And with that ADI had to drive the development down a direction to satisfy his interest in the silly proportions of this illustration without it just being an alien head on a scrawny man.

c) The Design Process
The next stage was to follow the design process, going along with the idea that there is no one direction or just one design out there that's going to work.

ADI's method followed the idea of casting a very wide net and go off in all kinds of directions with loose sketches and look at different things.

Their idea was that this was a very organic process where one thing grows into another.

(See: the Jordu Schell page and click on links to see artwork and maquettes)


d) Losing sight of Chris Halls' design
What Chris did in his drawings of the beast was revered with wonder by many afterwards and perhaps it might have been nice if they had gone with his concepts alone.

Even the Sylvain Despretz had good words to say about Chris' work.

However it was a fact that Chris remained in England unable to be present in the studio to push his vision.

e) Features from Ripley's face
There was some reference that the Newborn had to look like Ripley, but ADI were never big believers in incorporating the beautiful face of Sigourney Weaver into a monster's face.

The only time that they knew it had successfully been done was in HR Giger's paintings, where it has a creepy but beautiful quality.

Their problem was trying to ground the design and they didn't want to make it look as if it was straight out of Species. They took a different track to humanizing the creature.


f) It should have Ripley's eyes
Chris' original design didn't have eyes but had the now traditional alien dome covering that part of the face, but the final alien creature would have eyes.

The change in direction was to move away from the standard biomechanical look and thought in terms of very strong classical  death imagery, a skull like face, and try to lay it in textures that would make it part human and part Alien.

But ADI were not too happy about attempting to put Sigourney's beautiful brown eyes into the creature's skull like face.

Tom was worried about it looking like a totally different sort of creature but ultimately their job was to go in the direction that the director wanted, and they couldn't get rid of the idea showing the eyes

There was a scene where the Newborn would, as it were, 'make out' with Ripley. Sigourney was a daring actress, now fueled with Cronenbergundian enthusiasm , both she and Jean-Pierre wanted to disturb the Fox executives.

There the film crew was with the 1500 lb hydraulic creature, with Sigourney Weaver embracing and caressing it. It was a scary situation because it could have knocked her out if something happened or it head butted her. This was basically why they didn't go for a mechanical creature in the first Alien movie because of the danger.

There was an issue regarding the Newborn's genitalia and that Jean-Pierre would joke that since he was French, he wanted something sexy in the movie. Sigourney in particular was in favour of going further with the sexual attraction between the Newborn and Ripley, to the point where the creature would require articulated genitalia.

This Newborn had a gliding tongue that they would control and there were several takes where they had to get it right in Sigourney's mouth. Together with that, there was also an articulated erection that they built for the creature. ADI built them as a combination of male and female organs, they wanted to be a little vague about what sex the creature was. It disengaged from the vaginal canal and came out. Perhaps it was Tom Rothman who said in response "We're not having a fucking boner in an Alien movie!"

So, in the end, the genitals wouldn't be seen, they shot around them and because of the creature's height, there would be a lot of shooting over its shoulder, and in some cases, they would have to digitally remove the genitals. Tthe digital genital removal in Alien Resurrection was surely a first.


h) Further Confusion
Also the culmination of that was the newborn who is really half human and half alien. It came out of the need to show something more up front.

Jean-Pierre thought that the creature had a touch of King-Kong to it. He would have loved to use red blood but it wasn't permitted and it had to be yellow.

Alec Gillis himself admitted that he wasn't happy with the Newborn character, but it was the best they could do at the time.

The new aliens were more communicative with each other and also aggressive.

Giger could see traces from the head of one of his unused alien designs in the creature but he thought that it resembled Donald Duck and looked ridiculous.

Having said this, if one put the creature in a movie where it had nothing to do with Alien might have invited different comments about it.