Leading from
Guillermo del Toro
and 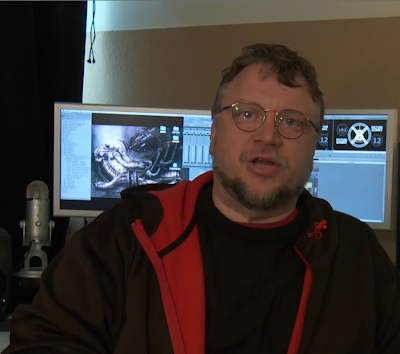 a) Seeing Alien
Guillermo Del Toro saw Alien when it came out in the opening weekend in the USA.
He was fourteen at the time and it wouldn't open in Mexico until November.

He recalled that he literally went under the seat.
Then he went back to school and no one believed him when he tried to describe the movie with its alien and a human who turns out to be a robot.


b) Interests in the alien suit
b.i) The rule breaker
He thought that the Alien beast suit along with the Gill Man from The Creature of the Black Lagoon was one of the two most perfect suits.

He had his thoughts about how Ridley had Bolaji Badejo in the suit, walking on all fours and backwards.
Bolaji as a monster suit performer was amazing to him.
b.ii)  The Alien as  Totemic God
A key moment of horror cinema for De Toro was when Harry Dean Stanton's Brett is being killed.

Del Toro perceived Brett as being unable to run because he is in awe of the creature when it is lowering itself in front of him.

He made a very enigmatic statement about how "it's a moment of man in front of a totemic god", and where this might go becomes another question.

c) The Company
He would see how the Company that would come to be known as "Weyland-Yutani" in Jim Cameron's Alien would show itself to be the macro evil of it all.

The alien drones were hardwired to be what they were, and when Burke decides to close the door, trapping the heroes with the alien creatures, that was the true evil, and the ultimate will was the will of the corporation.

He also enjoyed what Fincher did with Alien 3, curiously because Fincher took the rod puppet, and integrated it with the tools of compositing that were available.

e) Mimic as an Alien 3 1/2
However when Guillermo came to make the film Mimic, Miramax wanted him to make the film like Aliens and he wasn't happy with the fact that at the end because he wanted to make Mimic as he envisioned it.

It got to a point where the final scene copied the end of Aliens where Ripley finds herself in the egg chamber, which was not the ending that he intended at all.

What he ended up making, in light of the fact it was after Alien 3, might as well have been to him Alien 3 1/2.

f) On making an Alien movie

Although he had an affinity towards Alien, if Fox came towards him and asked him to make an Alien movie, he thought that he would think it unwise since it was playing in somebody else's sandbox.
When a movie series is so established it would be a little bit harder for him to do something.
g) Offered an Alien film
Concept artist Ty Ruben Ellingson found out about how Jim Cameron had seen Cronos and so it came to a point where he said Guillermo Del Toro "You should do Alien 3" and his response might well have been "no, another time" as if he had the sense to not make his first film a Hollywood sequel
However because of the time, it sounds as if this was most likely was Alien Resurrection that was being offered and because of that Del Toro was developing Mimic at the time.
h) Offered Alien vs Predator?

The films Blade Trinity and Alien vs Predaor went to directors David S Goyer and Paul W.S.Anderson respectively.
But according to film journalist  Richard Crouse later,  Guillermo declined because he was too busy getting his version of Hellboy to the screen.
Had he turned down both or just Blade Trinity?
i) See also : Guillermo del Toro talks about Lovecraft's influence on Alien