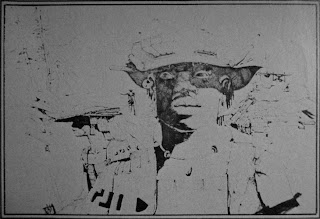 Interestingly enough the idea of the Sudanese nubians had been in Ridley's mind since the time he was thinking about his film project Tristan and Iseult, a knights in armour film set in a timeless post apocalyptic future inspired by the comic book Metal Hurlant.
The salamander people had long flicking tongues for catching insects. Later we will discover that the final Alien creature has a long tongue.