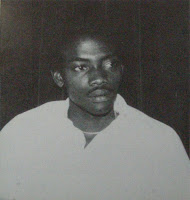 a) Tall skinny man spotted in a soho pub

They had in mind the idea of a creature that resembled a praying mantis, and they would need someone incredibly tall with very long legs, so that when they crouched down, it gave the impression of an insect. Ridley wanted to use a robot, but it was costly and dangerous. The production had put put a casting call for a very tall, very thin actor. Ridley had been looking at basket ball players, and he tested even Peter Mayhew for the alien. An agent named Peter Archer, had seen someone in a West End pub said to Ivor, " I was at a bar the other night, and it was a sort of students bar, lots of students there and I saw this guy and I don't know what he was, whether he was Somalian, or some, he was some African and he was impossibly tall, about seven feet tall with a tiny head and a tiny skinny body. you want to see him?"

b) Ridley Scott meets Bolaji in a pub

The story would go that Peter sent Bolaji to see Ridley who waited with Gordon Carroll in the pub, and watched at Bolaji walked in through the door practically on his hands and knees and then straightened up to be a tall timid man indeed with a small had and an elegant build, dressed in a tweed jacket with leather on the elbows, a cardigan , a tie and flannel trousers, near to seven feet in height who had never been in front of a camera before.

He wore a tweed jacket with leather on the elbows, a cardigan , a tie and flannel trousers


Bolaji realised that as soon as he walked in, Ridley knew that he had found the right person

Ridley told the agent "Why don't you pop over to him and ask him if he wants to be in movies?"

Peter Archer went over to Bolaji and then, armed with the old line said "How would you like to be a movie star?"

It appeared as if Bolaji thought they were joking, but he replied "sure."

Bolaji went to Ridley's office to meet him and so the question also came from Ridley himself "Do you want to be in movies?"


Boljai replied in what Ridley thought was a kind of Cockney accent "sure."
As far as Ridley was concerned, he was a second generation living in England.

c) Bolaji begins his involvement in the production

Bolaji known to be from the Gold Coast, and later Ridley would have the confused idea that Bolaji came from Somalia , perhaps because he was mistakenly introduced to him as being from Somalia.

26 year old Bolaji was a student of graphics arts in London, and he traveled extensively with his parents, to Ethiopia where he studied Fine Arts, (which probably would also give Ridley the confused recollection that Bolaji was Ethiopian) and to the United States, including a three year stay in San Francisco

When stripped down had a figure like a Giacometti sculpture and nine inches taller than the height of an average door although it seemed that Bolaji was known to be six foot ten. Ridley was certainly not going to find a woman like that. David Giler remained aware of his height but Gordon Carroll would at one point be so certain that he was 7 foot 2 inches but this measurement may well have stuck in the mind because that would be about the height that the final alien creature as a man in a suit was about.

So Bolaji was signed on for the role in May when they began to construct the suit. Originally he was to be one of a team of three artists needed to play the alien, including a mime specialist and a karate expert, but other experts of his unique proportions could not be found, however a stuntman substituted for the dangerous and physically grueling action scene.

On June 5th, HR Giger is finally introduced to Bolaji at Ridley's office

When Nicky Allder got to meet Bolaji, Ridley walked in with him and Nicky thought he was looking at a giraffe because Bolaji looked so thin and tall standing in the doorway with his head above the frame

The filming of the alien beast itself would begin in August 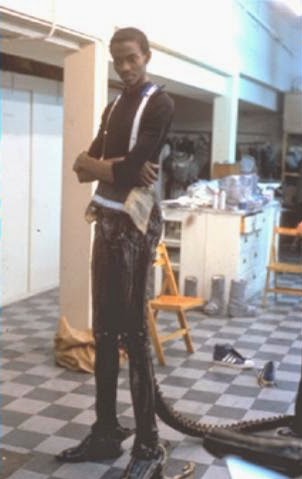