a) Greg Broadmore, an illustrator, writer, and concept designer at the fabulous Weta Workshop, and worked on concepts for District 9.

b) A creature inspired by Giger's artwork. The creature looks perhaps as if it's suffering from a hernia but might bring people to recollect the biomechanoid suits from Independence Day which feature a spike at the front of the bottom of the upper torso. Perhaps it borrows the spider eyes from the alien creatures from the Brothers Strause film Skyline and the plant like nature of the River Ghost alien from Predators. 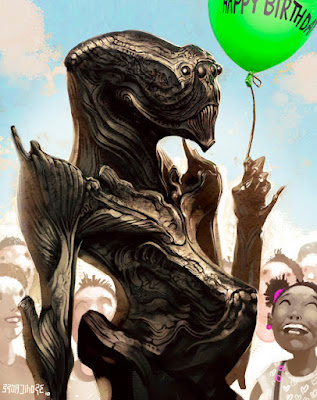