leading from
Prometheus creature designs
and


Prometheus: Gigers concept art
a) Giger beast
Giger drew some more heads for the alien beast, with the hand motifs remaining at the end, although they are perhaps no more hand like than fish fins. On 16th February, Giger started his drawings and drew the alien beast generally starting off perhaps as a normal one before he began to change it giving it wings extending from the back and a head that divided at the back into tentacles. And so we might assume that Giger has made use of Ivan Manzella's  design for the Trilobite as seen below for the starting point for the alien head. 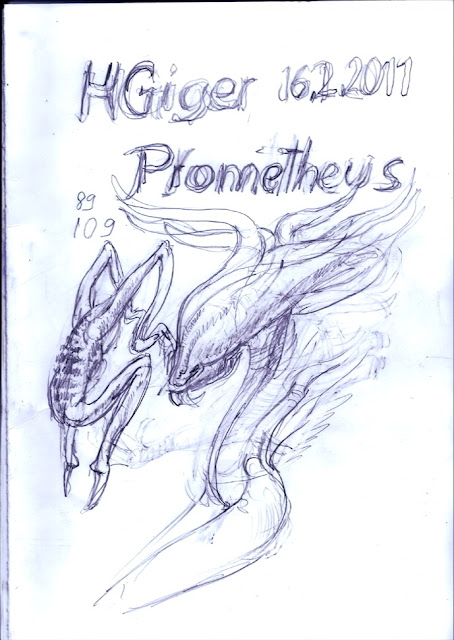 b) Hologram recordings
Giger drew an image exploring a hologram of a humanoid form with large shoulders, and next to it, his new alien beast.
If one look as the humanoid on the left, it has the face of his alien beast, and so I might wonder if he was drawing an alien beast to follow the holographic replays of the Space Jockeys.
The alien beast has a head that divides at the end and formations at the end that roughly resemble hands 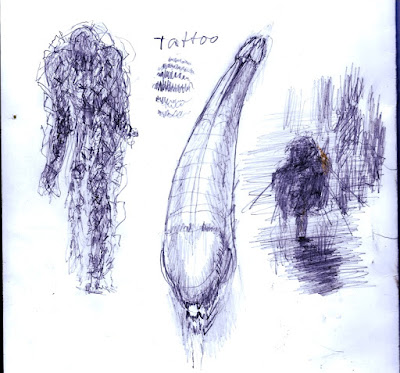 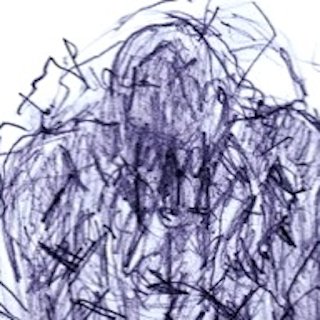 c) Studies for the Giger beast


The drawing of the alien head from the pages showing the holographic image, show the creature with its fanged mouth but the end of the head is split with small fin like forms at the end.

In the illustration numbr 01, perhaps the face of the creature resembles the front of a streamlined locomotive , although it's not very easy to work out what the details in the face represent, but a prominent jaw and chin can be seen. 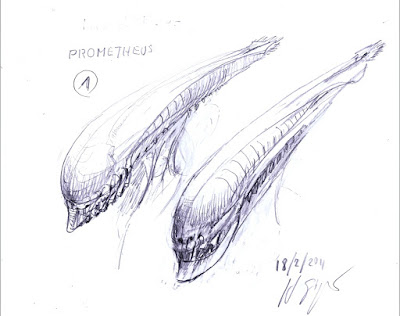 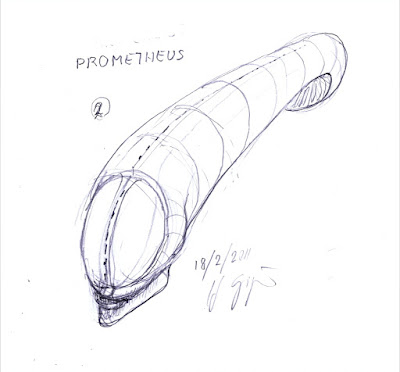 f) drawing 3, Prometheus, 18th of February 2011,
This alien haead has qualities of a silver fish, the dark face seems very small here. The wing like ends appear to be more prominent. 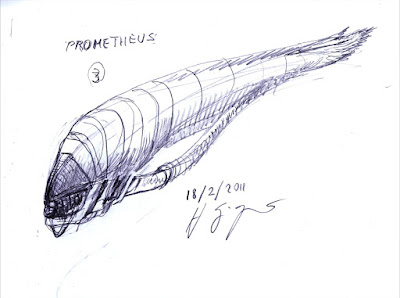 Giger had an interest in the work of JG Ballard and various book cover illustrations often show up as things that he appeared to have referenced.

August 28th 2018, exploring this book cover, I suddenly made a connection between it and this alien beast head.

Giger ought to have been familiar with the book cover image since the day it came out.

So he used the rounded sides of the car for the pipes, adding fins to the end of the divided head in a way perhaps reminiscent of the presence of the toes at the back of the car.

He gave the creature a face as separate from the car body as the metal grill is as the front, but Giger would draw rows of lines going across and down the sides of the face rather than down the front. 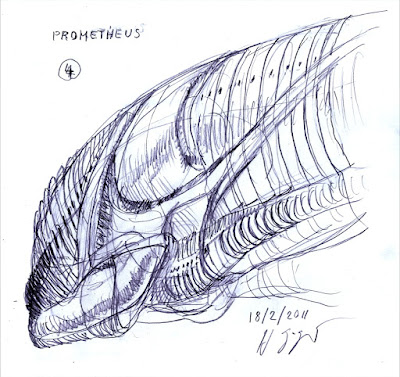 g.ii) Comparison to symbology of a deck Detail illustration
On this illustration showing a detail from his deck element images, a waterfall is shown and the hands seen would echo the fin like forms at the end of the alien's head. And so this would be a waterfall.