a) Casualties of a zoological expedition
In the original script, they would arrive at the spaceship, they would go inside, and so they would explore the whole spaceship and they they would see the pods and decide that this was a museum/ biolab vessel. The chamber that was referred to as the "pod room" was a portion of the spacecraft in which the alien creatures manning it had collected specimens of different aliens species from around the universe in a sort of futuristic zoological expedition.  So clearly the ship, piloted by whatever species was out looking for whatever it was doing, collecting information, found this, put it in the pod, froze it and got the wrong one, one that was more dastardly than they'd expected. In its own terms, the thing was a captive that broke free and tried to take over the ship and killed the pilot but the whole thing crashed. Originally the discovery of the spacecraft would have seemed like a bigger find, and there would have been more dead bodies of alien creatures lying around in the ship, and this would have made the main creature of the film no so unique. The set was several stories high and gloriously detailed with a metal/organic dichotomy that might have been reminiscent to some of the derelict ship from Alien.

b) Killings in the spaceship scenario
The creature took on the appearance of the alien that pilots the ship which would lead to it eventually killing the pilot and either it killed all the rest of the crew or this led to the crew killing one another from not knowing who was who, and so the pilot in the pilot room kills himself and crashed the ship on Earth in hope to stop The Thing. And so it was viewed that the pilot deliberately crashed it on the earth hoping that it would kill the creature. Now left with not knowing what to do, it gets outside the ship and freezes to death. So there was the original version of this creature and that is what we are supposed to see in the 2011 version of The Thing. It became all too expensive and complicated for the studios and so the whole back story was erased.


c) The alien pilot's race
The ship was steered by an alien race and the pilot of the ship controlled the ship with tubes stuck in its back, and operated the ship through those tubes connecting with the central core that was like the brain and the motor of thee ship. It was a futuristic take on a control centre. The director wanted it to be left vague and hard to understand otherwise it would resemble something too much of our own Earth based logic.


d) Dead pilot's death would mirror the death of a character named Colin
A dead hanging pilot would be encountered hanging in the middle of the flying saucer interior,  and the character Kate discovers it.  The entity would have been the last pilot alive and it commited suicide by severing its own airpipe much in the way that the character Colin would slash his own wrist and throat, to become the dead character found sitting in his chair in Carpenter's The Thing

d) What is the Thing?
The director came to understand that The Thing does not have an original form. It’s just a lethal virus that had assimilated countless other life forms. It carries all the genetic information of its previous victims. That’s why it can create all these random forms.


e) Under a Microscope
The microscope scene closely mirrors Carpenter's simulation scene where two cells one real and one imitation, become a single imitation cell rather than two imitation cells. The hostile thing's cell attacks a human cell, it takes over and the Thing cell takes over and then suddenly changes back into an imitation of the human cell. They merge into a blob (keeping the same mass in the assimilation process)  and out of that blob two new cells emerge. A copied human cell (The Thing in disguise) and the same attacking Thing cell. If one visualized it, it looks as if nothing has changed. The beginning and the end of the sequence are the same, you start with two cells but it's not clear what is happening. So they copied Blair's animation from Carpenter's The Thing to simplify it. Perhaps the thing and its victim should keep roughly the same mass and weight before and after assimilation. The thing cannot invent mass or weight, and perhaps it should loses just a bit of weight because it burns energy/mass through assimilation. But to explain it without loss of mass, Kate's microscope scene and Blair's computer animation would be very hard to understand visually.


f) Fooling the imitation into believing it's real
A hostile Thing cell attacks a human cell, the Thing cell takes over and then suddenly changes back into an imitation of the human cell. The imitation is perhaps so perfect that it does not know what itself is, even as a consciousness,  but is perhaps ultimately, unwittingly, controlled by this other thing. The characters Edvard,  Juliette, Norris, Palmer and so on probably didn't realise that they were the Thing.  For the sake of the psychological integrity of the imitation, it forgets the assimilation episode. But when it wants, when it needs to act, it takes over control and manipulates its next victims. Norris is the best example in John Carpenter's movie, he has pains in his chest but he doesn't even know why. Blair at the end of Carpenter's The Thing and is controlled by The Thing. And it is the same for for Juliette, when she talks to Kate about Colin. It is The Thing that makes her say these things but Juliette actually believes it. 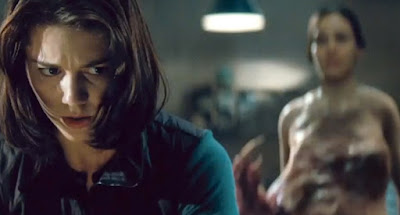