leading from
Prometheus' Cast and Characters 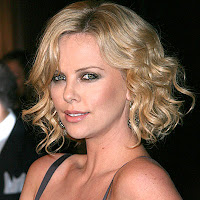 a) The role of Vickers the "Suit"
Charlize Theron plays the role of Meredith Vickers, a woman character, a different kind of company "suit" or even a "corporate entity" who runs the company that has pulled the money together to fund the mission to send the spacecraft to another planet,  her character is cold and business like, appearing to have an agenda that starts out to appear to be one thing and transforms into another

b) Charlize cast as Meredith
Ridley came to Charlize and said " Do you want to do this?"
She replied " For me, to work with you is a really difficult decision to make, but I'll think about it"
Actually she wanted to work with him, but she read the script and felt instinctively as if the character was slightly too one-dimensional for her. Sometimes there are characters within films that are not explored, she was looking at this whole thing from the perspective of a film producer wanting to make a better film and she didn't want to hurt the film

c) Changing Meredith
Then Damon Lindelof stepped in and she got on the phone with him and Ridley and she threw very loose cannons towards them, with no specific ideas but she wanted to have a role that was somewhat more layered. They talked about the whole thing and the more they realised it, with the big themes  of what the story and the film was about, there was a way to explore some of that, in a different way because this Vickers was such a different character. She was neither a believer or a scientist. She comes with this very frigid, cold, economic mind, and yet there's somewhere about her that's questioning and doubting. When Ridley and Damon came together to fulfill the potential on the character, she was on board. Charlize was inspired by the changes to the role where she starts out as one things and then ends up another in the third act as someone with an agenda that was completely different.

d) On the set
She noticed how Ridley shot everything so layered that she would always wonder. There were many days when she would show up and just be a character in the corner lurking over everybody, not saying anything but just watching. And for her it added to the enigma of the character and about what her agenda really was.