leading from: Prometheus - The Return of the Space Jockey


On the 24th of February, 2012,  Filmsite.hu published an article in which is was claimed Ridley Scott stated that Guy Pearce would play Peter Weyland. Alien Prequel news with help managed to have the article in Hungarian translated into English.


"When the first 'Alien' movie and 'Blade Runner' were made, I thought that in the near future the world will be owned by large companies. This is why we have the Tyrell Corporation in 'Blade Runner', and Weyland-Yutani in 'Alien'. They sent the Nostromo spaceship.

The Prometheus is owned by an entrepreneur called Peter Weyland, and is played by Guy Pearce. That's the connection between the two films, and nothing more. Prometheus is a new film, a new world, and is full of new ideas. And of course new monsters as well."

On top of this, the article quotes a mysterious IC Press as their source. Since no one had any communication with Filmsite.hu, there wasn't actually in the end any evidence that Ridley made any such comment and the immediate thing to do was to take this with a pinch of salt.

a) This strange statement that Guy Pearce being Peter Weyland was quickly followed on the 28th of February, 2012, by TED.com posting a viral video for the character Peter Weyland giving a speech in the year 2023.  This viral promotional video is not supposed to be taken as a part of the film so it goes.

The character begins to talk about T.E Lawrence also known as Lawrence of Arabia, being able to not mind the pain of a lit match when putting it out by pinching it with his fingers and then begins to launch into a monologue about fire being the first form of technology used by man and that the titan Prometheus stole fire from the Gods to give to mankind , he briefly talks about the myth of Prometheus and then turns the speech into a statement about his latest development in the cybernet industry

Weyland : "T. E. Lawrence, eponymously Lawrence of Arabia but very much an English man favoured pinching a burning match between his fingers to put it out. When asked his a colleague William Potter to reveal his trick, how is it he so effectively extinguished the flame without hurting himself whatsoever, Lawrence just smiled and said the trick, Potter, is not minding it hurts. The fire that danced at the end of that match was a gift from the titan Prometheus, a gift that he stole from the Gods, and Prometheus was caught and brought to justice for his theft. The gods, you might say they overreacted a little, the poor man was tied to a rock as an eagle ripped through his belly and ate his liver over and over, day after day, ad infinitum, all because he gave us fire our first true piece of technology, fire. 100,000 BC: stone tools, 4000 BC: the wheel, 9th century AD: Gundpowder, a bit of a gamechanger that one, 19th century, Eureka! : The lightbulb, 20th Century: The automobile, television, nuclear weapons, space craft, internet, 21st Century: biotech, nanotech, fusion and fission and M theory and that was just the first decade. We are not three months into the year of our Lord, 2023. At this moment in our civilisation, we can create cybernetic individuals who in just a few short years will be completely indistinguishable from us, which leads to an obvious conclusion, we are the Gods now.

For those of you know know me, you will be aware by now my ambition is unlimited, you know that I will settle for nothing short of greatness or I will die trying. For those of you who do not yet know me, allow me to introduce myself, my name is Peter Weyland, and if you indulge me, I'd like to change the world"

b) The idea is that "Peter Weyland has been a magnet for controversy since he announced his intent to build the first convincingly humanoid robotic system by the end of the decade.
Whether challenging the ethical boundaries of medicine with nanotechnology or going toe to toe with the Vatican itself on the issue of gene-therapy sterilization, Sir Peter prides himself on his motto, “If we can, we must.” After a three year media blackout, Weyland has finally emerged to reveal where he’s heading next. Wherever that may be, we will most certainly want to follow." (http://blog.ted.com/TED2023/)

His biography as given is "Sir Peter Weyland was born in Mumbai, India at the turn of the Millennium. The progeny of two brilliant parents; His mother, an Oxford Educated Professor of Comparative Mythology, his father, a self-taught software Engineer, it was clear from an early age that Sir Peter’s capabilities would only be eclipsed by his ambition to realize them. By the age of fourteen, he had already registered a dozen patents in a wide range of fields from biotech to robotics, but it would be his dynamic break-throughs in generating synthetic atmosphere above the polar ice cap that gained him worldwide recognition and spawned an empire.
In less than a decade, Weyland Corporation became a worldwide leader in emerging technologies and launched the first privatized industrial mission to leave the planet Earth. “There are other worlds than this one,” Sir Peter boldly declared, “And if there is no air to breathe, we will simply have to make it.” 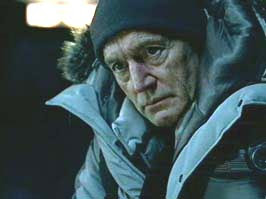 a) This Weyland Corporation has a fragmented connection with Weyland Industries founded by Charles Weyland an American. Originally Weyland would have been a British company inspired by the name of the car company British Leyland and the name became changed slightly to avoid lawsuits. 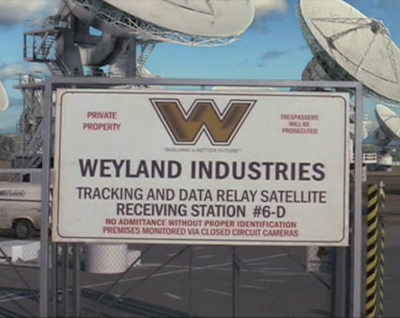 b) It was Paul Anderson's need to find an actor who played an android in the Alien series to fill the role of Charles Weyland, Ian Holm who was English and Lance Henriksen was American, however Henriksen was the one who made himself available for the role and so Weyland soon became a company founded by an American. This created a certain amount of confusion because this meant that Bishop the android was supposed to be made in his image as a homage to him, while in Alien 3, the character listed in the credits as Bishop II who was supposedly a human being although many questioned this right from the start with no ultimate solution to what he was, Paul Anderson declared that since the credits listed him as Bishop II, he must be an android, without giving thought to the fact it was just a loose label to give to the individual, and Lance Henriksen found himself agreeing with this possibly for the sake of publicity.


4) Fractures in the Weyland timeline

In Peter Weyland's biography there is no actual connection given with Charles Weyland from Alien vs Predator, but maybe the background story given to Peter Weyland makes no attempt to be specific. When Jon Spaihts provided a link to the video on 7:26pm of Feb 28th, 2012 :TED talks from the future. http://blog.ted.com/ted2023/ #Prometheus" then another Twitter user named Rob Girvan at 7:30 PM asked Jon Spaihts on Twitter " I am hating myself for asking this..but did you take into account AVP for the Weyland family history? Ages seem to line up.".

John Spaihts responded 7:58 PM: " We tried not to violate canon wherever possible; but the canon's not completely coherent and in the end story wins."

Rob Girvan's response was 8:02 PM:I approve of anything that wipes that movie from canon. Was curious if you factored it in. Many thanks for your answer! "

However the fact that the script borrows the idea that Weyland are reponsible for robotics and will develop androids becomes something borrowed from AVP and the name of Weyland Industries on the website came from AvP. At first there was some confusion for many viewers about why Weyland Industries was celebrating 50 years of building better worlds in 2023,  which lead to Wikipedia entries to Weyland Industries being created in 1973, (and it could even discovered at this time that Weiland Industries  "Northern California & The Bay Area's Source for Custom Woodwork and Custom Wooden Architectural Elements" had also been established in 1973) and it looked as it could be seen as if it vaguely suggested that Peter Weyland had taken over Charles "Bishop" Weyland's old company and revitalised it years after his death, but instead on March 6, 2012, it was revealed that Weyland Industries were celebrating fifty years into the future, perhaps Weyland's company was just being opened in 2023 so the website might be a representing Weyland Industries 2073.

Originally, Ridley Scott had envisioned that Alien took place around 2070s, a hundred years or so into the future from when Alien was made, and Nostromo a Weyland-Yutani craft had been tramping around the cosmos for about a decade, and here were seem to have it presented to us that Weyland and Yutani perhaps have not joined together in 2073. although a lot of fans will have dated the time of Alien being in the 2100s.