Prometheus: Encounter with the Engineers references Dromedan from Jack Kirby's The Eternals?

a) Dromedan's crypt
a.i) in Eternals Vol 1 #16-17, October and November, 1977 , the character Dromedan , a mummified humanoid is been encountered by the heroes of The Eternals when his crypt beneath New York City has suddenly become unearthed by exploding gas lines.  His tomb is found empty and his helmet that made his mental powers useless has come off 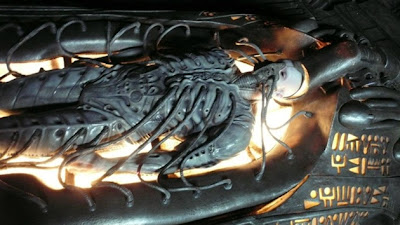 b) Dromedan and Prometheus' head in the ampule room 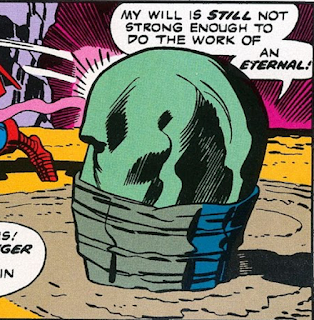 b.i) When the heroes encounter Dromedan, suddenly one makes the rock beneath his feet become molten liquid, he sinks into up to his neck before it becomes solid again.
The character Zuras attempts to put the helmet back on Dromedan.
Dromedan was bred by the Deviants so that he would use his power in their service.
He had the ability to control others with his thoughts and so he was considered very dangerous

The sight of this head sticking out from the ground looks as if it ought to have become the giant head in the ampule room from Prometheus.

c) Dromedan rises and stands tall above those around him
c.i) Dromedan breaking free from the ground,  stands above his captors,

c.ii) In Prometheus, the engineer has been awoken while sleeping in his hibernation crypt

c.iii) He rises out of his crypt and stands tall above the humans who surround him.

c.iv) Peter Weyland talks to the Engineer while David translates as the Engineer looks down upon these small people.

d) Serpentine creature that develops multi limbs attacks Dromedan
d.i)  However, the witch Sersi using her magic creates a large serpent which coils around the Dromedan and then he creature suddenly develop perhaps a dozen forelimbs by which it attacks the mummy, although this is not the way he is finally brought down.
(NB it's Sersi's magic that transforms a handgun barrel into something that resembles an early incarnation of the face hugger idea See: Panel from The Eternals # 6 (December 1976) by Jack Kirby where a gun is transformed by the character Sersi into tentacles that wrap around a Deviant's face referenced in Giger's Face hugger design? )

d.ii) The Trilobite attacks The Engineer
The Engineer is revealed to be another large angry humanoid, who killed all the crew of the Prometheus around him apart from Elizabeth Shaw who ran away
It's only when his spacecraft has been knocked out of the sky by the Prometheus.
It decides to go and kill Elizabeth Shaw who is in the escape ship.
Shaw had earlier on given birth by Caesarian section to a creature known as the Trilobite, which has been locked in a room.
Before the Engineer reaches Shaw in its desire to attack her, pushing a button to open the door ofthe room where the thing is imprisoned, she unleashed Trilobite creature and this thing having grown large attacks the Engineer with its multiple limbs.