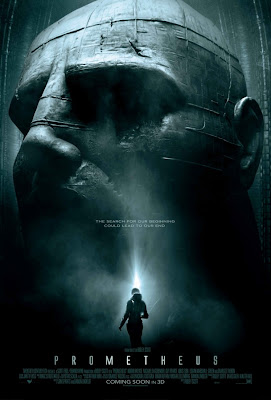 a) We understand that the giant head in the film Prometheus represents a member of the Engineer's race. However we might take a look at the fact that there are a frameworok of lines covering the head.  We might take a look at the images of Henry Moore's lithographs of "The head of Prometheus" from 1950 and notice an almost similar type of framework structure (perhaps connected with his drawings for an edition of Goethe's Promethée published that year. Here we have the Prometheus drawings "made using a method that Moore called ‘section-line’ drawing. He used white wax crayon directly on paper with crossing lines to show the three-dimensional nature of the form and then added details with coloured crayons and pencils. Finally he added watercolour or ink washes across it and emphasised shadows and extra details with pen and ink." (http://www.culture24.org.uk/)

b) Henry Moore in 1950 also created the image of Prometheus standing on a rock, with a latticework of lines running through his body and one arm half raised , this was a book cover for an edition of Goethe's Promethée as published in 1950 . At the beginning of Prometheus, we see the Engineer standing on a rock and soon is holding his hand before his face as his body begins to disintegrate. 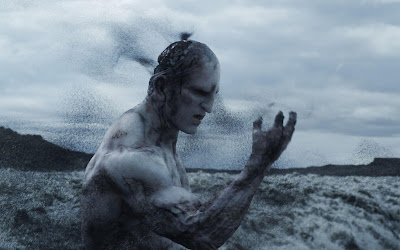