a) Hopes for a new direction
Early on in the design process, Gillis and Woodruff felt that they should take the alien in a different direction.

The day they got the job, they each went home and started sketching basic designs before faxing them to Fincher. Their idea was that the creature was constantly mutating to adapt to whatever the environment, and it gave them a reason to have an alien that was considerably different from the adult aliens in either Alien or Aliens. However they were willing to let these ideas go, in favour of approaching the director with a blank slate and saying "What are you looking for? How can we support you to tell the story?"

Ultimately, David Fincher decided that he wanted to remain with what have been seen in the first film. His idea what this it wouldn't be so quite a high technological looking thing because it wasn't trying to blend in with a spaceship's surroundings because now they were in a prison environment with concrete walls.

He thought that the alien is a monster with tubes and cardboard stuck all over it and that, so he said, was the only construction technique that Giger used when he sculpted for the first Alien movie.

Gillis and Woodruff had access to many pieces of the original Alien creature suit and head for reference on Aliens, and it literally had plastic parts upon which one could read the catalogue numbers along with valves and plumbing pieces .

The idea for the alien of Alien 3 was that the creatures were growing into a mechanical being, and one might wonder what to make of that. 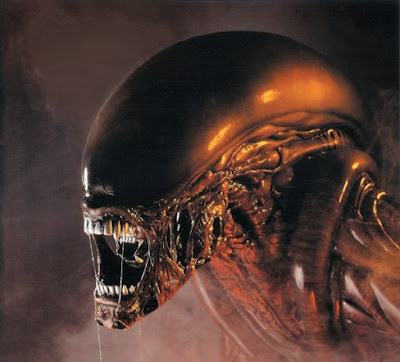 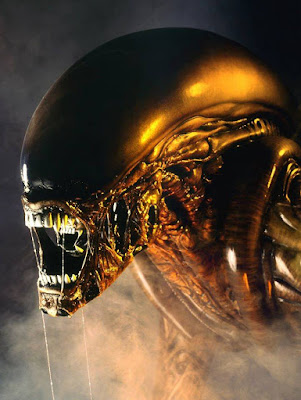 They also put more colour into the Alien, which was originally just black and sepia and wanted to add colours from his original artwork to be found in the Giger's Necronomicon book and the Giger's Alien book.

There was a rust colour in the prison environment and so that would be used in the palette for the alien beast.

Since the effects of Alien 3 wouldn't have the spectacle of the last film, they wanted to make this creature into a believable organism and its biomechanics would be achieved in a different way
d) Still Giger's Alien
Despite all the changes that they were making, their idea was that this was still Giger's Alien, and they had done very little to change it.

They claimed that they went as far as to draw inspiration from Necronomicon at the finishing stages, since his monster would be scrutinized more than ever and it looked as if they went even as far as Giger's New York City series not found in the book.
e) New alien doglike
They were keen to point out that the earlier alien was insect like and now the new alien was more dog like having gestated inside a Rottweiler.

The Alien's picked up the dogs instincts and took on its characteristics, and so they wound up with an alien that was more of a quadruped and could run around on all fours, while still being able to stand up on two legs

The final adult alien would look like a man in a suit and other times a puppet and never did the two look as if they were the same entity.