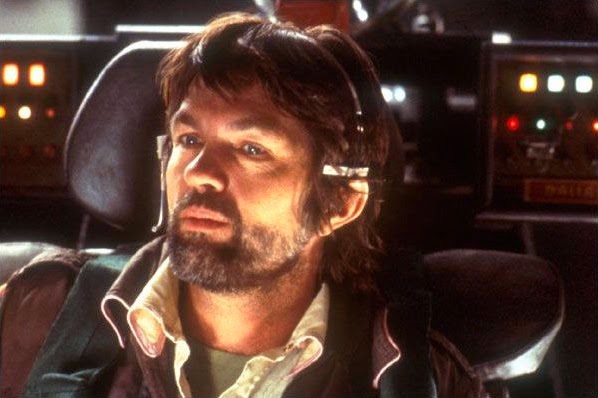 a) First Approached
Tom Skerrit was in Minneapolis half way through working on a film called Ice Castles and he received the script for a movie called  "Alien".

At the time he understood that it was going to be an inexpensive film, two or three million dollars.

He read it through and it was at a time when they didn't know who the director was at the time.

His initial response was ‘Well, it's okay. I mean, it's crafted well,’

And they told him, ‘You're the only one they sent it to. There's no director and no other actors and it's a $2 million budget.’

When he read the script, he thought "oh this is not  an actor’s script, and it's a two million dollar film no director – it’s gotta be, you know, another Ed Wood movie."

He saw that it was an ensemble piece but thought that there was not much for an actor to do here and two or three million dollars wasn't going to make a great special effects science fiction movie, so he turned it down.

b) Reapproached in timelines A & B
In 2001 , looking back, Tom Skerrit's memory of the event stated that about a month later, he got a call from s Gordon Carroll telling hum  "We’ve got Ridley Scott, and the budget’s up to ten or twelve million bucks. " and that was certainly was a higher budget.

Tom's earlier story stated that his response to that was "hold on here, on second thoughts, let me see. I’ve heard of this Ridley Scott guy, I’ve heard that he did this thing called The Duellists. Can I see this?"

The producers said "yes, and we'll run a screening for you tomorrow"
By 2013, his memory of the event was that he saw the film a week or so after turning down the script, that he was blown over by it.)

He had never seen a movie that caught so much production value as The Duellists.

It was a magnificent looking film painting from beginning to end.

On seeing it, he wanted to remember who the director was, and so, on hearing the name Ridley Scott attached to his scri, his response was "Sold. Sold!".

He knew how Ridley did it with his own money for nine hundred thousand dollars and so when he saw it, he thought "jeez, I’d like to work with this guy, I love this." and those thoughts also translated into ‘Oh God, I'd love to mentor with this guy, watch him and see how he works.’

And perhaps in this other telling of events a week later, he got the call from the producer telling him the good news

c) Eager to join
To some extent he knew Yaphet Kotto and Harry Dean Stanton.

He didn’t know Sigourney began she was brand new in the cinema seen and he was quite eager to work with Jon Finch (who had been cast as Kane until he was taken ill early into filming) and Ian Holm.

d) Rehearsals
In Ridley's offices, the actors gathered to start doing some dialogue together and while Ridley would interrupt to describe his visuals.
They got through a couple of pages when Ridley told them "Here’s the platform: Texas Chain Saw Massacre”
Tobe Hooper's film Texas Chainsaw Massacre wasn't a film that he had seen yet but he heard that it was pretty scary
Ridley continued "I’m going to scare the shit out of them.”
Although it was fascinating, it seemed as if in the first half hour while they were doing this, they only managed to get a couple of lines in while Ridley was caught up in his visuals.

The rehearsal was interrupted when an assistant director came in to speak to Scott about a technical issue,  “We need you on the set to show you something.”  and Ridley apologised as he left the room.

Skerrit looked around at the other actors, and now he was ship's captain he felt that he had to say something, said "I guess this makes me the captain of the ship. We might as well all know that we’re in this together." somewhere with that his other words were “Hmm, Texas Chain Saw Massacre. Okay. Let’s go to lunch.”