HR Giger: Apparition of Bes the Egyptian
Dwarf God in Spell I

Leading from
Giger's  The Spell I
and
Bes

a) The Bes connection
On the evening 22nd of December 2015, a picture of Bes with two monkeys either side has been posted on Archaeology & Prehistoric & Ancient Wonders which has nothing to do with aliens, Alien or Giger. (Many thanks to Yavuz Tellioğlu for posting this image at a specific moment) Bes was the beast like Hittite dwarf god. I only thought that it seemed almost interesting to see the two monkeys on the shoulders and how they reminded me of the machine gunners in The Spell I but the following day, on the 23rd, I suddenly realised that features of Bes had been incorporated into the image. Giger will have collected at least two different Bes to use as inspiration for the painting. 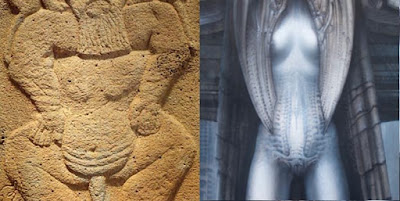 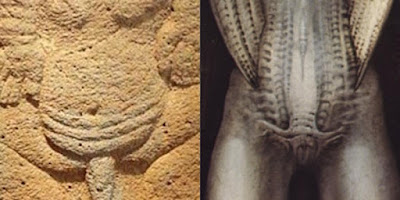 The Bes here has crescent strips going across the lower belly or groin, we see on Giger painting, ribbing up and down the belly with a defined pelvic girdle


Bes beard is divided either side of the mouth and Giger has extended it, perhaps in conjunction with the features found on the folds of the robe of the  Cristo Redentor statue of Rio De Janeiro 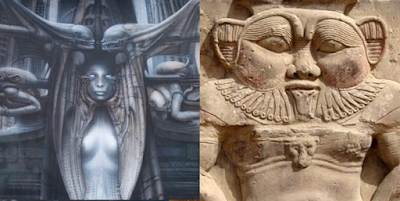